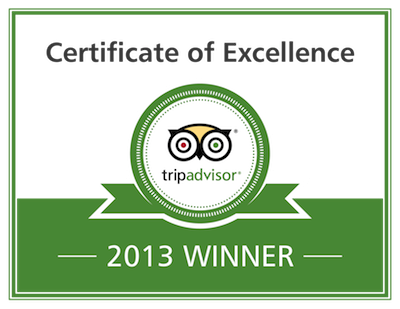 Better Paris Photos (now Better Travel Photos) is thrilled to have been awarded the 2013 Certificate of Excellence from TripAdvisor for the third year in a row (as long as we have listed on TripAdvisor, in fact).

This accolade is given only to organisations that consistently achieve outstanding traveler reviews on TripAdvisor. Only the top-performing 10 percent of businesses listed on TripAdvisor receive this award. At the time the award was granted to Better Paris Photos, we had 141 oustanding reviews and were ranked as the 11th most popular activity to do in Paris.

We value this achievement so much because it means that our fundamental objective of providing visitors to Paris with exceptional photography experiences is being met. It motivates us to work even harder next year to improve our services. And we are working on that already.

We thank all of those who took the time to share their experiences with TripAdvisor readers. It is because of your feedback that this award was possible. If you participated in an activity with us recently and have not yet submitted a review, it is still possible to do on our Review us on TripAdvisor.

Happy photography for the remainder of 2013 and we hope to see you in Paris!