Exhibit: Brassaï and his time machine in "For the love of Paris" 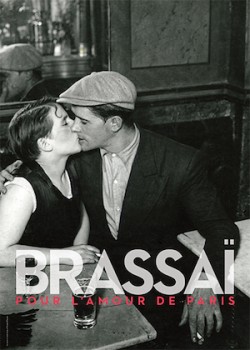 La Mairie de Paris has prepared a special treat for classic black & white photography lovers: an exhibit of one of the most famous Parisian photographers of the 20th century, Brassaï.

Hosted in Hôtel de Ville, the City Hall of Paris, the show presents a panorama of works of this Hungarian-born photographer who spent most of his life in Paris and became known for his love for this city. The vast majority of images are original silver prints of the era, some of them signed by Brassaï himself.

The show covers all the important aspects of Brassaï's career: Paris by night (first series of photographs that gained him great success), portraits of Parisian boheme and intellectuals of the first part of the 20th century (such as Picasso, Dali, Sartre, Simone de Beauvoir, Kertesz and many others), photographs of couples kissing in the streets, workers at night markets, prostitutes, circus artists, cabaret dancers, members of high society... as wells as photographs of Parisian graffiti and some artistic nudes. Aside from his photographic work, the exhibit also contains several Brassaï sculptures made of stone and bronze. Truly, a man of many talents!

Today's viewer, who may be overwhelmed with images of the City of Light, may find some of Brassaï's work unsophisticated, we should not forget that the majority of the images were made back in the 1930s and 40s. What today seems a cliché was a breakthrough in photography at the time. Brassaï's images often look so familiar because they were retaken and reinterpreted by other photographers and became classics a long time ago.

My personal impression of the exhibit was that of a time machine. While walking the very same streets of Paris every day, I could not help but plunge through the photographs of Brassaï into the by-gone era of the 1930s. Through the bohemian atmosphere of clubs, bars and cabarets, I could see the elegant ladies on the street of Rivoli and gentlemen in hats, the rich and the poor, the famous and the unknown...

Eternal Paris, Paris for lovers and for artists, for workers and for high society, by day and by night, sometimes somewhat naïve but still very romantic, is waiting for you – just as it was seen through the lens of one of the legendary French photographers of the 20th Century, Brassaï.