Exhibit: "A Poetics of Engagement" by Willy Ronis 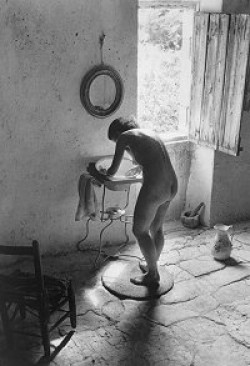 If you find yourself in Paris between now and August 22, 2010, you will not want to miss the Willy Ronis photo exhibit called "A Poetics of Engagement". Willy Ronis, who would have turned 100 this year, is considered one of the greatest photographers of the 20th century. Along with Doisneau, Cartier Bresson and Izis, he belongs to the humanist photography movement, which is about taking people as the main subject of the photograph. His place in that movement is confirmed in this exhibit, which is at the Monnaie de Paris.

Paris was Ronis' home town and he loved to explore it on foot, capturing the picturesque scenes, kids playing in the streets, young couples in love, busy pedestrians, but also solitude in the poor neighborhoods or the crowds at the Louvre.

The photography exhibit presents 160 black and white photos articulated around 5 main themes: work, the street, travel, the body and some intimate moments of his own life. There are many nostalgic pictures of post-war Paris, some never seen before photos taken in the 80's, along with some photographs taken while he traveled to New York city or Venice. No matter where he was, he always managed to capture the mood of a place.

I was particularly touched by the simplicity of his compositions and how he managed to get the essence of the scene with just a few visual elements or just the right light. It is also very interesting to read the stories of some of his photographs and how they came together through his eyes. He explains, for example, how one hot summer afternoon he came down the stairs of his home in Provence and saw his young wife splashing cool water on her face. He asked her to stay there, grabbed his camera, took a few shots and forgot about the whole thing. It was only much later when he was back in Paris that he rediscovered those pictures, one of them becoming the now very famous ' Le Nu provençal' and the one chosen to illustrate the poster of this retrospective.

As in the case of many attractions in Paris, I would recommend going early to avoid long line ups. A must see until August 22nd, whether you are a Willy Ronis fan or not!