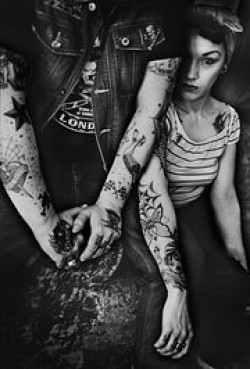 It's no secret that Paris is full of photographic treasures. There are at least a few exhibitions by world famous photographers at any given moment of time. And if you ever get cold after wandering the streets of the City of Light in wintertime, come and have a look at the exhibit of Swedish photographer Anders Petersen in the Bibliothèque Nationale de France.

The show, "Photographs", represents a collection of all the important series of Petersen's career, starting with the famous Café Lehmitz that he shot back in the 1970s. And just like then, he still likes to create photographic walls of his works, pinning them tightly, without frames, one next to another. The exhibit also features a documentary on the author that helps to better understand his complex but very charming personality and his work.

Anders Petersen is one of those photographers that has always been true to himself, and that reflects in his photographic style. Shooting exclusively in black and white, he transmits his absolute presence in the moment through sharp contrasts and straight-on flash, thus creating the images that are intuitive, frank and extremely personal.

There are no taboos for Petersen: men and women, dressed and naked, dogs, cats, babies at the moment of birth and elderly people on their deathbed, prisoners and mentally ill, prostitutes and drunkards... However, the more one looks into this collection of seemingly dark and sometimes shocking images, the more one feels their vulnerability and the vulnerability of the man behind the camera. These images are full of questions with no answers, of longing and of eternal search for oneself.

As the author explains, "I am more of that style of photographer, who is more intuitive, using my stomach and my heart. I want my cut to be organic, I want an organic result." Petersen reduces the distance between the photographer and his subjects to the minimum; there is virtually no distance at all. His images are intimate almost shockingly so. Such result can only be achieved by living in the very same moment as the events are happening, by being an immediate participant instead of a detached observer. Each of his series is a result of several years of living next to his subjects, seeing them every day and being part of their community, thus building the highest possible level of trust.

Anders Petersen's exhibit is a show designed not to entertain the viewer, but to make him feel and think. Behind his strong visual language lies the quest of eternal search of his own identity, as well as his own innocence and vulnerability. It's a show where one sees a naked soul of a man in black and white photographic prints.