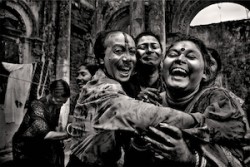 While rambling the streets of Paris in search of the best shot, you might sometimes want to take a little break and pop into a photo gallery for some inspiration.

Although situated in the very heart of Paris, on the famous Île Saint-Louis, the Galérie Clémentine de la Féronnière is a well-hidden place and finding it might be a challenge! So, if you’re ready for the quest, here goes: on the main street of the island, rue Saint-Louis-en-l’île, find the building number 51. Go through the impressive green door on the right and you will end up in a yard. Continue through the archway to the second yard and on your right you will see the gallery, currently hosting an exhibit entitled "Belongings", by Bangladeshi photographer Munem Wasif.

Suddenly, the romantic Paris will disappear and you will find yourself in the mystical world of Old Dhaka, the capital of Bangladesh. In the series of black-and-white photographs, you will see the daily life of simple people, their joys and sorrows, days of work and moments of contemplation. It is hard to believe that these photographs were taken in the twenty-first century – so “timeless” they look! A woman doing her daughter’s hair in the old courtyard, a barber shaving a man on the banks of the river, a cook cleaning the fish for cooking in a room full of birds, people hugging, laughing, smoking, market and street scenes… Daily routines are transformed through the lens of Wasif into almost Biblical scenes where the time stops and the viewer ends up in a lost world of Old Dhaka that is about to disappear.

As Wasif himself explains, “Puran Dhaka, or Old Dhaka, was a rather unlikely subject. For it existed all around me. I live here. It was almost trying to find the unseen within the everyday. Old Dhaka had made me appreciate properly cooked greasy food, the sleaziest of slang, and it is where I had come to rediscover the same small town pulse of holding on to things than letting go.” It took him some time to understand why the people he met and photographed were so attached to their houses and courtyards. For them, these were not only the buildings in which they lived, but also contained their deeply rooted history, ancient traditions and way of life.

There are not that many places left in the world where one can see life as it was for hundreds and hundreds of years, where the streets and the buildings breath of time. Munem Wasif’s exhibit Belongings is a chance to get a glimpse of a far away world full of traditions that are still alive, but who knows for how long? How much more time there is left before the old residential areas will give way to brand new commercial centers and shopping malls? How many memories will be preserved?