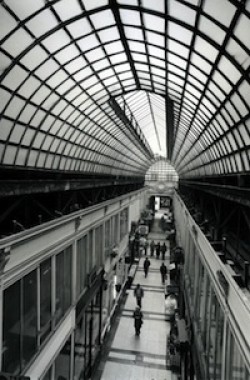 Between 1976 and 1980, the famous photographer Robert Doisneau walked through some of my favourite Parisian covered passages, taking pictures in Passage Verdeau, Passage Jouffroy, Galerie Vivienne, Galerie Véro-Dodat, etc. His pictures were published in 1981 in a book titled: "Passages et galeries du XIX siècle. Le piéton à Paris" ("19th Century Passages and Galleries: The pedestrian in Paris"). Until January 15th, 2010, you can see a free exhibit presenting a collection of these photographs at the Musée de la Monnaie de Paris.

By looking at the thirty black and white photos presented, it was interesting to notice how little those passages and galleries have changed since the pictures were taken some thirty years ago. The atmosphere has remained the same, some of the store fronts have not changed much, and I even recognized some of the book stores that are still in business today. It would be possible to take very similar images today in those passage.

So, if you want to walk back in time and take some interesting pictures 'à la Doisneau', I highly recommend a stroll through some of those passages, followed by a visit to the Doisneau photo exhibit. You could then have fun comparing your own photos to those of the famous master! Have you visited those parisian passages yet?