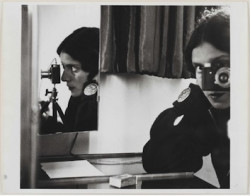 Set in the residential neighbourhood of Montparnasse is a quiet little gallery called Musée Bourdelle. Once frequented by 20th century artists such as Matisse, Giacometti, Vieira da Silva and Germaine Richier, what was originally the studio of sculpture Émile-Antoine Bourdelle’s has been kept nicely intact. With its beautifully-manicured gardens and sculptures dating to the 1800s, there is no doubt that many progressive ideas have been created in this comfortable space.

In keeping with the idea that the gallery was once a place where great notions were developed and expanded upon, it is a perfect environment for “In the photographer's studio - Staged photography”, a photography exhibit currently presented there and running until February 10, 2013.

The exhibit proposes and describes fourteen stages in the evolution of the tools of photography. It becomes quickly apparent that the creation of a photograph was once more of a scientific experiment than the artistic pursuit it has become today. Numerous displays outline the scientific approach to photography, revealing a host of technical facts to the inquisitive visitor. Early processes are presented through displays covering the original "Daguerreotype" of 1839, “Chronophotography”, “The Autochrome plate” and “The Camera Obscura and the Darkroom”, among others. Fifty-four images -- from no other than André Disdéri, Helmut Newton and Henri Cartier-Bresson -- are shown with detailed descriptions to demonstrate how each process was applied and the results achieved.

According to the exhibit, the iconic camera from Leica emerged in the eleventh stage during what is deemed “the technical revolution of the 1930’s”. It was during this period that cameras became less cumbersome and the ability to enlarge and print better quality images was introduced. Later, during stage twelve, the self-developing film of the polaroid was introduced. Colour also became used more frequently. In the more recent stages, it is interesting to see first hand the impact that computers have had, allowing photography to evolve at an increasing pace.

Today, light weight equipment and all of the advances that are available make it more convenient and reliable than ever to capture great imagery. With this in mind, the exhibit leaves a strong appreciation for the work of photographers in the early years of the craft: in addition to the passion shared by photographers throughout the ages, early photographers also needed such a great amount of patience and diligence, to deal with the technical challenges and uncertainties of the day. It is quite a contrast with the instant gratification now available to photographers of all levels. For that realization alone, “In the photographer's studio - Staged photography” is worth the detour.