Exhibit: Manuel Álvarez Bravo, "A Photographer on the watch" 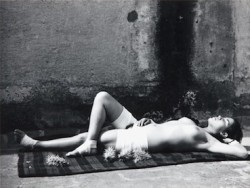 Manuel Álvarez Bravo (1902-2002) appears to be a man torn between two worlds, one practical and the other full of aesthetic pleasure. With a modest beginning, Alvarez Bravo left school at the age of 13 to care for his family and became employed in the administration of the National General Treasury. From this more practical start in life, his unique story evolves into a tale of a man with tenacity and great creativity. Over a career that spanned a good part of the 20th century, Álvarez Bravo created a vaste and diverse body of photographic images, which documents the history of his country’s evolving social and cultural atmosphere.

The Jeu de Paume is showing 150 of these images in the exhibit "A Photographer on the Watch". Upon entering the exhibit, it initially feels more like an architectural display. The collection gives you the impression that the images have been carefully planned and plotted, much like what you would expect from a detailed rendering. The displayed colors are muted and distinctly linear. While wandering through the displayed years, you cannot help but notice the evolution in the artist’s style.

For example, one of Alvarez Bravo’s most talked about pieces is a nude image of a young woman entitled “The Good Reputation Sleeping” (1939). Bandages are placed on her arms in a peculiar way. She sleeps on the sidewalk with slight pieces of cactus resting on her. Although the piece would be shocking for that time period, it reflects a consciously planned piece of art and in turn does not elicit an alarming effect.

Alvarez Bravo has a signature style as his images of cafes, street vendors and even the various Mexican street scenes evoke a calming emotion. He manages to display the simplicity of an area or object and in doing so provides a haven from the otherwise frenetic nature of everyday life.

A photograph entitled “Zapatos” (1923) is another example of the artist demonstrating his mastery of simple, clean lines. In this image, the shoes lined up in a uniform manner is not typical of a marketplace where vendors sell goods frantically and hustle and bustle is inevitable. Instead, this image captures neatly displayed shoes in a dusty urban setting. While his work is at times documentary in nature, it also manages to infuse mere objects with the meaning and context of the scene.

This exhibit, which includes previously unpublished and unseen images, is particularly striking for the breadth of the styles and the period covered by the life of the artist, one of the most important figures in photography in Latin America in the 20th Century. Though the pieces are calculated, they do not appear contrived. Alvarez Bravo manages to keep his orderly nature intact while producing wonderful images that present Mexican culture in the 20th century.