Exhibit: Marc Riboud at the Atlas Gallery in London 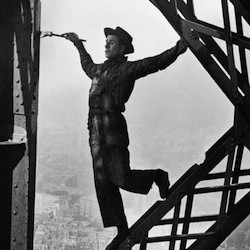 The Atlas Gallery is nestled on the corner of Chiltern and Dorset street next to a delicious looking Nordic baker and opposite one of the oldest pubs in Marylebone, The Barrow Mow. On a summer’s day, a crowd will gather to enjoy a mid day pint in the sun and as a visitor it is certainly a delightful setting to be in. Atlas is a private gallery and from March 27th to May 9th 2015 it is showcasing signed, black and white photographs by the renowned French photographer Marc Riboud.

The gallery is fairly small with about 30 images on display on two floors. The current exhibition 'Paris to Peking' presents photographs taken in England, Paris, America and China. Riboud's images mainly capture scenes and important moments that are now deemed historic. One photograph in particular is one of a young woman demonstrating against the war in Vietnam by holding a flower up towards soliders as they point guns at her. His photographs invite you to look and then look again: through his images, he tells a story that you want to decipher and you might wonder 'What is the silhouette doing in the Beijing snowy landscape? Who is that little girl standing on a street corner in Paris? What is she looking at and where is she going?' Solitary figures often appear in Riboud's images, particularly in landscapes, evoking a feeling of loneliness.

Riboud was born in 1923 and with a camera given to him by his father he took his first photographs at The World's Fair of Paris. In the early fifties he published what is perhaps his most renowned series of images, The painters on the Eiffel Tower. The images characterise a man painting the tower, posing like a dancer, precariously balanced and with the roof tops emerging through the haze far below him. The Atlas Gallery is also presenting an interesting selection of press cuttings about this particular series of now famous photos.

After meeting Henri Cartier-Bresson and Robert Cappa, Riboud became a member of the Magnum photography agency and from then onwards he traveled far and wide capturing everything from political moments - he was one of the few photographers allowed to travel in South and North Vietnam in 1968-’69 -  to everyday life. Riboud has the classic street photographer’s style which allows the viewer to sail through time and be a part of those important 20th century, historical events. He photographed hugely emotional and often tragic moments as well as amusing portraits and joyous events.

The Atlas Gallery is definitely worth visiting: you will have time to reflect on the photographs, the curator is very helpful and easily answers questions, and afterwards you can even enjoy a delicious cinnamon bun in the Nordic bakery next door!

Hermione thrives in interacting with photography enthusiasts on photo tours and in capturing the personality of visitors through portraiture. She fell in love with Paris and now divides her time between the French capital and London. Learn more...