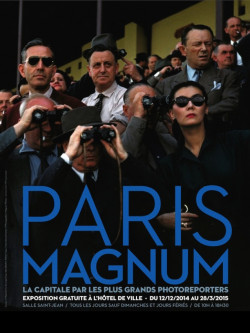 Just before Christmas, Paris City Hall opens its doors for yet another magnificent photography exhibition about the city and its dwellers in the turmoil of life and historical events, this time as seen by the world’s greatest photojournalists of Magnum agency throughout the 20th century. This show not only tells the history of Paris and its evolution in time, but also showcases some of the finest examples of photojournalism, including many timeless classics that can be seen printed in large format.

During the past 80 years that are covered in this exhibit, the city of Paris has been through war and peace, revolts and struggles, hunger and glitter, political decisions and philosophic discoveries, liberation and new art movements. Magnum photographers have always been in the center of events, not only capturing the very essence of what was unfolding in front of them, but also actively participating in building a new, better life. This is why the 150 photographs presented in the exhibit go beyond mere illustration of Parisian life in different times: by combining history, journalism and art through direct involvement in the events, 30 Magnum photographers created true masterpieces.

The Magnum agency was founded in 1947, just two years after the Second World War, by four prominent photojournalists – Robert Capa, Henri Cartier-Bresson, George Rodger, and David Seymour – “to reflect their independent natures as both people and photographers, emphasizing not only what is seen but also the way one sees it.” Today it is one of the most prestigious photo agencies. It unites almost 80 independent photographers recruited through a long and meticulous selection process that demonstrates a rigorous approach to photographic work and faith to the agency’s principles.

The exhibit is divided into 5 chronological sequences: “Magnum before Magnum” combines early work of its future founders from 1930s and 40s, when the main approach of more than just witnessing in photography started to shape; “Poverty and Anxiety” of 1945-59 with its smoking chimneys over Paris, cold and hunger, where faces bear no smiles; “The Swinging Sixties” reflect major changes in society with eruption of pop art and student uprisings of May 1968; “Reaction and Philosophical Resistance” of the 1970s and 80s is shown through classic portraits of Pompidou and Giscard, Foucault and Sartre, Truffaut and Gainsbourg; and finally “Picturing Marginality” extends from the 90s to our days and depicts the stiff competition of photojournalism with other visual media, such as television and internet. Besides, there are also separate slideshows featuring the work of particular photographers on various themes, such as fashion or jazz in Paris.

If you are visiting Paris this winter, make sure to see Paris Magnum to learn more about the transformations and evolution of the City of Light, and to get more inspiration from the masters for your own photography.