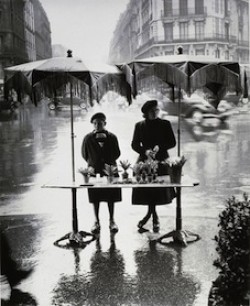 Located in the charming streets of le Marais, the Maison Europeene de la Photographie is currently hosting an exhibit entitled “Photography in France, 1950-2000”. Launched in November 2012 as part of the "Mois de la Photo à Paris 2012" (a photography festival that takes place in several cities every other November), the exhibit runs through to 13 January 2013.

This installation is a must see for any photography or design enthusiast. The collection makes a point of showing just how photography evolved between the 50s and the turn of the recent century.

The 50's collection outlines a romantic era with a style that is quintessential Paris. It defines simple beauty at its best. I found two examples that struck me as eloquently capturing the 50’s in France: Jean-Pierre Sudre's black and white photograph entitled "Le panier aux oeufs" (1953) is a simple basket of eggs delicately placed, from which for some reason it is difficult to pull away. It seems to embody an innocent and refined time.

Also spellbinding is Marc Riboud's "Le peintre de la Tour Eiffel" (1953), which displays a man painting the Eiffel Tower. The man looks more like an acrobat effortlessly gliding through the air than someone tasked with the upkeep of France's most iconic monument. It is apparent that the 50's and 60’s were the building blocks of photography in France in later years.

The 70's expanded and developed very different ideas, as evidenced by the racier Yves Saint Laurent displays of nudes beside what appears to be promotional advertising shots. The 70’s room features examples of the continued evolution of the use of photography in advertising, for example with what looks like a Kodak commercial with more vibrant shades and risky images.

The arrangements of the exhibit suggest that 80s spawned even more blatant shock value campaigns, while the 90‘s seemed to revert to traditional views, embracing the grace and charm of France. In this era images were sharper and explored new technologies in turn having the ability to shed light on new creative views.

The exhibit is a great way to explore numerous styles and see the years side by side. It is amazing how photography has evolved since the 50’s, but also nice to see the old imagery and remember how it all began.

By Michelle Nocera on Tuesday, 4 December 2012.