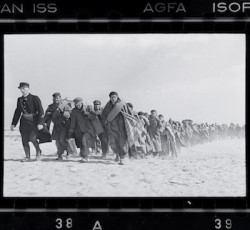 The legendary Mexican Suitcase with Robert Capa's Spanish civil war photos was considered lost for many years. It was passed on from hand to hand to preserve it over the years but it eventually disappeared. It was rediscovered in Mexico city only in 2007, and its contents are now being presented, until June 30, 2013, at the Musée d'art et d'histoire du Judaisme in Paris.

The suitcase actually contains almost 4500 negatives by Robert Capa, Chim (David Seymour) and Gerda Taro who were all committed to the antifascist struggle. Between 1936 and 1939, they captured portraits, battles and the effect of the war on civilians. Some of those images where published in magazines at the time and became iconic over the years. These well known images can be seen at the exhibit along with photos that were taken just before or after, revealing interesting sequences.

The contact sheets are interesting to look at for a number of reasons: we can see events unfold, how each photographer developed his/her own style to work the subjects, and how they got to the image that was finally published. What is less expected in the exhibit are the photography mishaps that took place, such as bad exposures when moving from a bright outdoor setting to a dark indoor environment, wrong choice of shutter speed that create totally blurry and unusable images, etc… this perfectly illustrates once again for all of us aspiring photographers how even experienced photographers can still encounter simple technical mishaps.

More importantly, there had not been any war photography before the work of these photographers, and it has long been considered as the most innovative and passionate reporting of the Spanish civil war. They laid the foundation for war photography as we know it today: reporting tragic events while still finding ways to show humanity and hope through the terror.