Exhibit: Who is Afraid of Women Photographers? 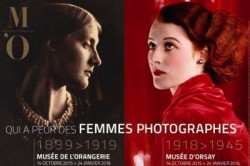 November is best known as the "month of photography" in Paris: from its biggest and most famous photography fair Paris Photo in the Grand Palais to hundreds of various photo shows in the galleries and art spaces all over the city. This year, Musée d'Orsay together with Musée de l'Orangerie present a two part magnificent photo exhibition "Who Is Afraid Of Women Photographers?" - a tribute to women's role in the history of photography.

Today no one is surprised by the sight of a woman with a camera, however, this was not the case some hundred years ago, when a woman's role in society was very different. From the early days since the invention of photography, women were taking photos alongside men. While in the 19th century they were mostly restricted to traditional genres, such as portrait and still life, the turmoil of events of the first part of the 20th century brought many significant changes. Women photographers started experimenting not only with various techniques, such as color photography, solarisation, macro photography, and photo montage, but also took a new, critical and ironic look at the world around them. They start to express themselves more freely, they explore their own identities, take part in the newly emerging artistic movements, break the codes and stereotypes, dare to go further in their explorations of the world.

Musée de l'Orangerie presents the first part of the exhibition covering the period from the birth year of photography in 1839 to the end of World War I in 1918. The second part, presented in Musée d'Orsay, covers the period from 1918 till the end of World War II in 1945. Already in early 1920s, women play an important role in photography: they not only take photos, but also contribute to the theory of photography, as well as organise exhibitions, create schools and manage commercial studios and agencies. The new status of photographer opens the doors previously closed to women. They conquer more and more territories by photographing typically "masculine" subjects, such as cars, machinery, and industrial landscapes. They get out of their studios and start exploring the new horizons through their cameras, from landscapes and travel sights. The invention of new lightweight portable cameras encourages women photographers to cover major events in the world and even go to war.

Based on a thorough research, the exhibition takes a new, modern look at the history of photography. Deeply connected with social science, human development and gender studies, the show is also a collection of photographic masterpieces from such masters as Berenice Abbott, Margaret Bourke-White, Dorothea Lange, or Germaine Krull, to name just a few. It is a chance to pay respect to all those brave women photographers that made their way through taboos and stereotypes of the 20th century and let their voices be heard.