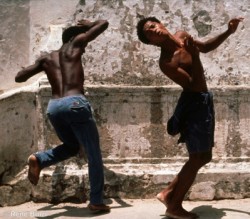 Fall is back in Paris and the city is once again infused with life after long summer vacations. Photographic galleries re-open their doors to welcome visitors and prepare new shows for those hungry for visual treats. La Maison Européenne de la Photographie is no exception: it welcomes you with a display of seven photo exhibitions, including such masters as René Burri, Pascal Maitre or Keiichi Tahara, which makes a visit to this exhibition space more enjoyable than ever.

It was the name of René Burri, a famous Swiss photographer, a member of Magnum, known for his iconic images of major political, historical and cultural events of the second half of the 20th century, that attracted me to the MEP in the first place. The exhibition is entitled “Movement” and is presenting different photographs from René Burri’s career, including his interest in cinema and moving images. The show itself, however, would make more sense if presented as a retrospective since we see his most known images from all over the world, such as a portrait of Che Guevara or the funeral ceremony of J.F. Kennedy. It still makes a great opportunity to see a good selection of classic images in print and to appreciate them again.

The most inspiring discovery for me this time was the work of Pascal Maitre, a French photojournalist. Stark, full of color, powerful images of large format presented on crimson walls make a long lasting impression not only visually, but also on the emotional and human level. A great storyteller, Maitre spent more than 15 years in Africa in search of meaningful images. By photographing a continent often at war in most deplorable conditions, he manages to find innocence, beauty and humanity and to transmit them to the viewer. "In photography, you have to learn a country, a continent, and the people who live there", says Maitre. "It's a desire to tell a story, it's the point of view, it's the engagement that makes the photo a work and also a proof of something", adds Romuald Hazoumè about the work of Pascal Maitre, whom he met in Benin. To me, the discovery of Pascal Maitre definitely became one of the strongest additions to the world of travel photography.

Finally, the third impressive collection of images in MEP is that of Keiichi Tahara, a Japanese photographer fascinated with light. The abstract, although still recognizable, black-and-white photography of Tahara makes light the very essence of his work. Subtle and aesthetically pleasing, his images are a pure enjoyment to the photographer’s eye.

So if you happen to be in Paris this fall, do not miss the opportunity to visit the MEP and see these splendid shows with your own eyes!