Exploring the hill-top 'village' of Montmartre

Clinging to the northern hill of Paris, Montmartre has long been associated with the artistic community that lived there and is still known for its small village atmosphere. Painters such as Picasso, Modigliani, Van Gogh and many others lived, worked and got their inspiration from this area. It remains today a great source of subject matter for photographers.

At the apex of the hill, the white dome of the Sacré Coeur Basilica is a famous landmark in the capital that dominates the city skyline. The Basilica offers many photography opportunities and is especially striking against a bright blue sky, in the warm sun rays of a late afternoon, or illuminated at night. It is also well worth visiting the inside, although no pictures are allowed. If you go early enough, you might even meet some of the nuns working around the Basilica.

A few steps away, crowds gather on the place du Tertre where artists set their easels among the restaurant tables and umbrellas. Artists busy at work can be good photo subjects, but be careful to respect their space; asking permission to take a few pictures is also generally appreciated. The trick is to find a good background to avoid any distracting elements that would spoil the image.

Keen photographers will want to go beyond the square to get away from the crowds and enjoy the little winding back streets and quiet corners. In the further reaches of Montmartre are additional photo opportunities for typical old Parisian scenes such as romantic stairs, narrow cobblestone streets and traditional Parisian lamp posts.

Look also for the small cabarets and the windmills, discover the statue of St. Denis holding his head in his hands, watch and capture a game of 'pétanque' played by the locals, or join the kids having fun under the trees. Continue and explore the lively rue des Abesses or rue Lepic with their numerous vendors, cafés and bakeries, or discover the 'Love Wall' where 'I love you' is written in so many languages it is impossible to count. Have fun and see how many you can guess! 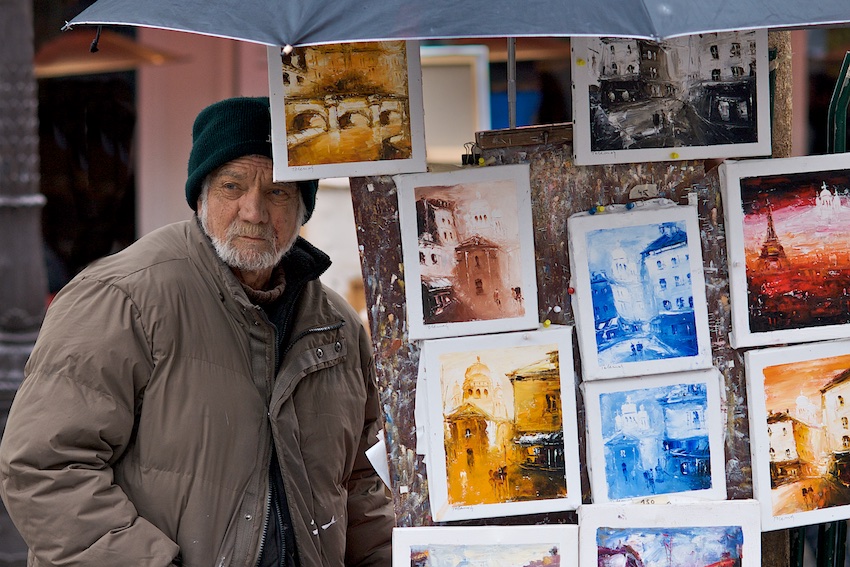 Views over the city: One would think it is possible to get great images of the Paris skyline from Montmartre. While, it is true that there is an open view from the Sacré Coeur plaza down onto the city, photographers risk being disappointed... Because the belvedere faces south, for much of the day the sun is pretty much in your face making the light too harsh or too flat for interesting images. The best time for a good image is therefore either very early in the morning, or at sunset. The corner of rue Azaïs and rue St. Eleuthère also offers a good location for pictures of the Eiffel Tower with some typical Parisian roofs.

Note though that some areas of Montmartre can get very crowded during the high tourist season from mid April to late September. To have a chance to take pictures without people wearing the typical tourist shorts and sun hats, it is best to come early in the morning before the tour buses arrive. By 10:00 am, it is already a little late...

Have fun and enjoy seeking inspiration from some of the great artists who lived on the hill!

Getting there: Montmartre is in the 18th arrondissement, and can be reached by Métro line 2; Blanche, Pigalle, and Anvers (the closest one to Sacré Coeur) are possible stops.