Ganesha Festival 2015 in Paris: Tips on Photographing a Traditional Celebration

Each year at the end of August, several streets in northern Paris explode in one of the biggest, loudest and most colourful festivities: the Ganesha Festival. Streets bursting with colours, traditional Indian music from every corner, the smell of incense and jasmin flowers, smiling people dressed in their best clothes - everything blends together in the atmosphere of celebration! If you are ready for one the most flamboyant sides of the City of Light, grab your camera and join me for an unforgettable walk among the worshipers of Ganesha. 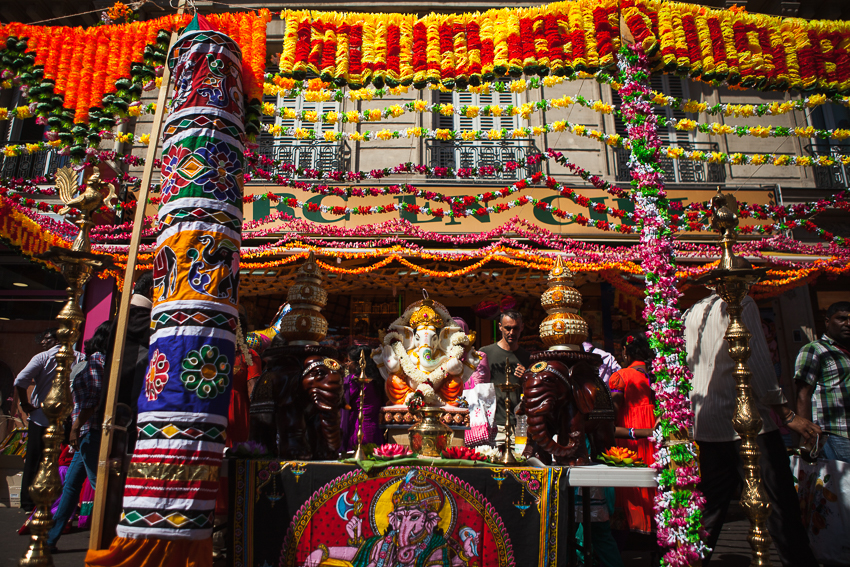 Ganesha, a Hindu deity with an elephant head and a human body, is one of the best known and most worshiped in the Hindu pantheon. He is a God of beginnings and wisdom, a remover of obstacles, and a patron of arts and sciences. The annual festival named Ganesha Chaturthi is celebrated for ten days throughout India, Sri Lanka, and Nepal, as well as outside India in the Hindu communities of Paris, London, and worldwide. Everybody is welcome to join the festivities symbolising Ganesha's visit, to share the joy and to experience Hindu culture. 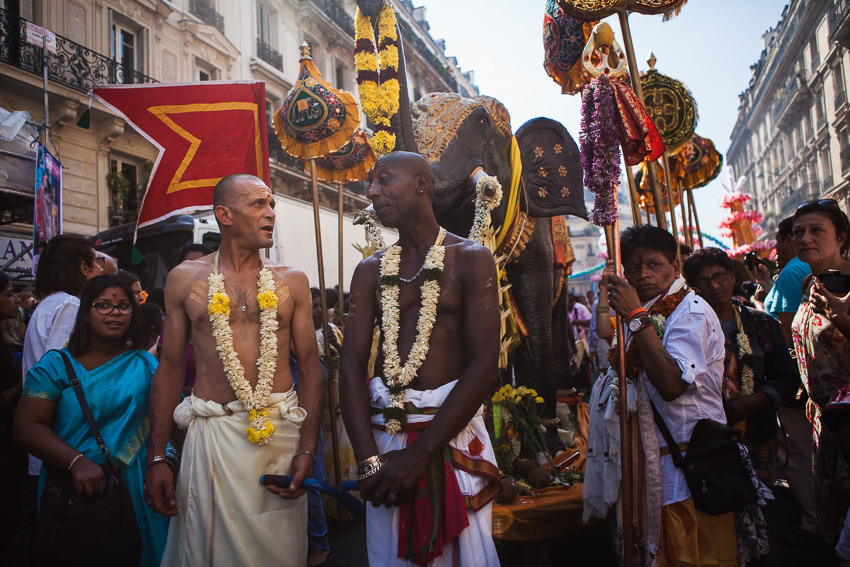 In Paris, the day usually starts at 9 am with a religious ceremony in an Hindu Temple in the 18th district. At 11 am, a large and colourful procession of three Ganesha chariots, completely covered with flower garlands, heads into the streets and circulates until around 3 pm, followed by musicians, dancers, men carrying arches decorated with peacock feathers, women with camphor burning in clay pots on their heads, and other participants. Dressed in vibrant saris and dhotis, men and women follow the chariots to make offerings to Ganesha made of Ganesha's favourite sweets, coconuts and bananas, special blades of grass called dhruva, incense sticks, and of course flowers. 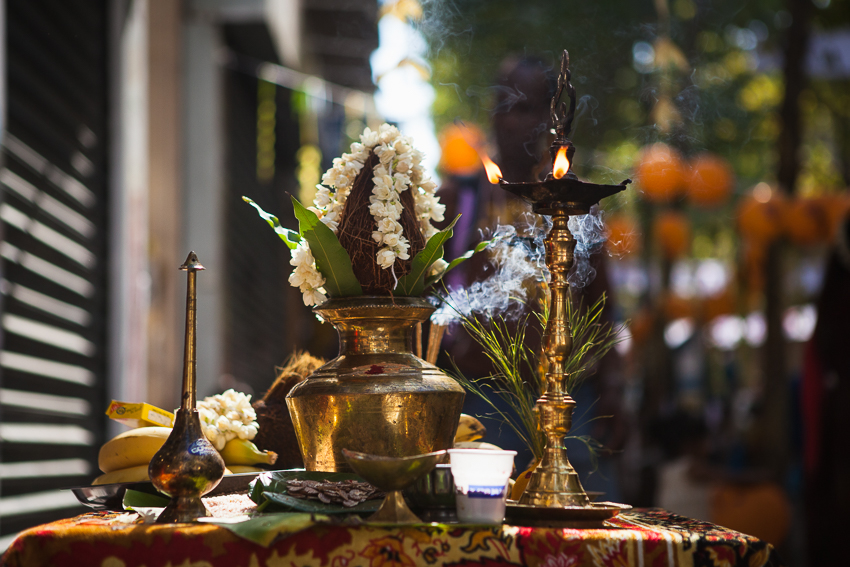 As soon as you arrive to La Chapelle metro station, you are immediately immersed in the world of Indian music mixed with the smells of incense and jasmin, sold as you arrive on the metro platform. The bright crowd easily carries you outside of the metro and you find yourself plunged right in the middle of events, slightly overwhelmed by the kaleidoscope of flowers, smoking incense, balloons of all shapes and sizes, soap bubbles, and ever smiling people. Each shop along the street boasts a brightly decorated table with offerings for Ganesha. Sometimes it's hard to believe that you are still in the city of Paris! You take a few steps together with the crowd and soon see the first chariot heading your way. Time to get the camera out! 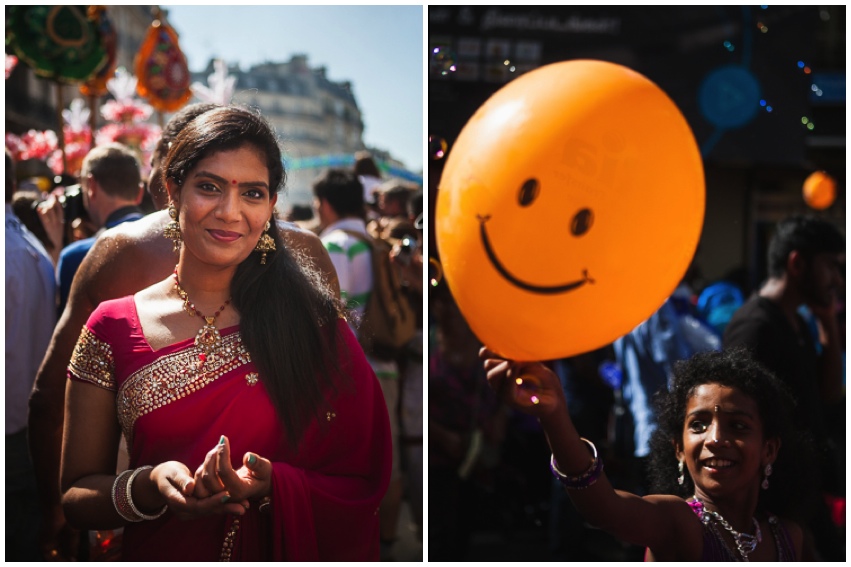 For street festivals and celebrations, I usually bring only one lens, my trusty 24-70mm f/2.8. It's versatility and the wide aperture helps me capture both the event and its details, together with some portraits. Changing lenses in the dancing crowd would be challenging and not particularly safe for the camera, so bring your most versatile lens with a lens hood and do not overload yourself to make it easier to navigate around. 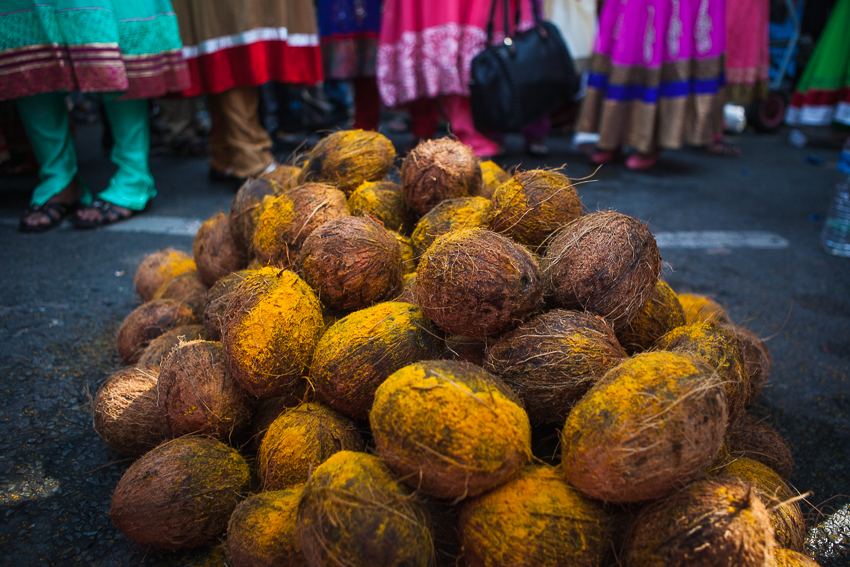 As to the settings, I usually photograph on Aperture Priority, switching between f/2.8 for portraits and details and f/9 for street scenes. When photographing action, it is also very important to keep an eye on the shutter speed to make sure it is fast enough to stop the movement (usually 1/200 sec and up) and adjusting the ISO accordingly. You may need to raise the ISO to 500 or even 800 on a sunny day, when the chariots move into the shade. 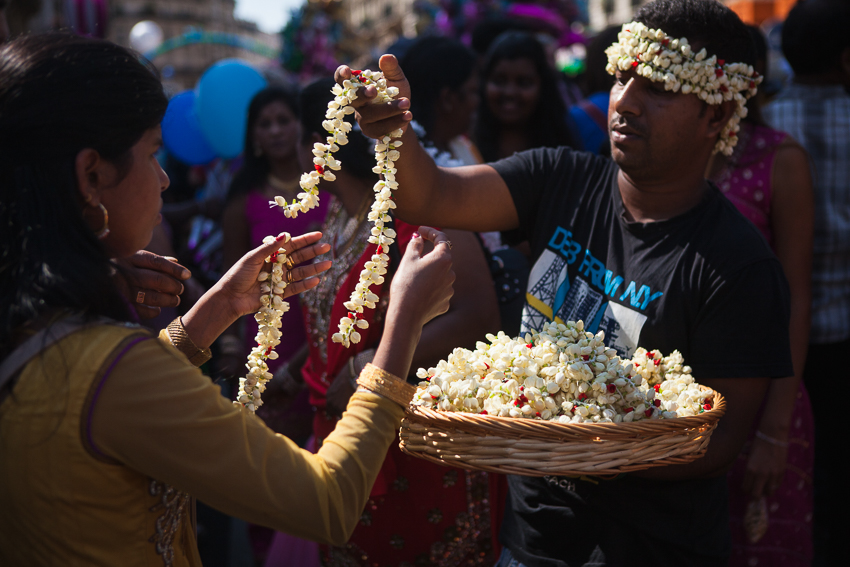 One of the most spectacular rituals during the Ganesha festival that is definitely worth capturing is the smashing of coconuts. In Hindu tradition, the coconut shell symbolises the illusionary hardness of the world, the flesh stands for our individual karma, and the coconut juice means human ego. Before the ceremony, coconuts are sprinkled with bright yellow powder and stacked along the road, waiting for their moment. By breaking a coconut, Hindus offer their heart to Ganesha. 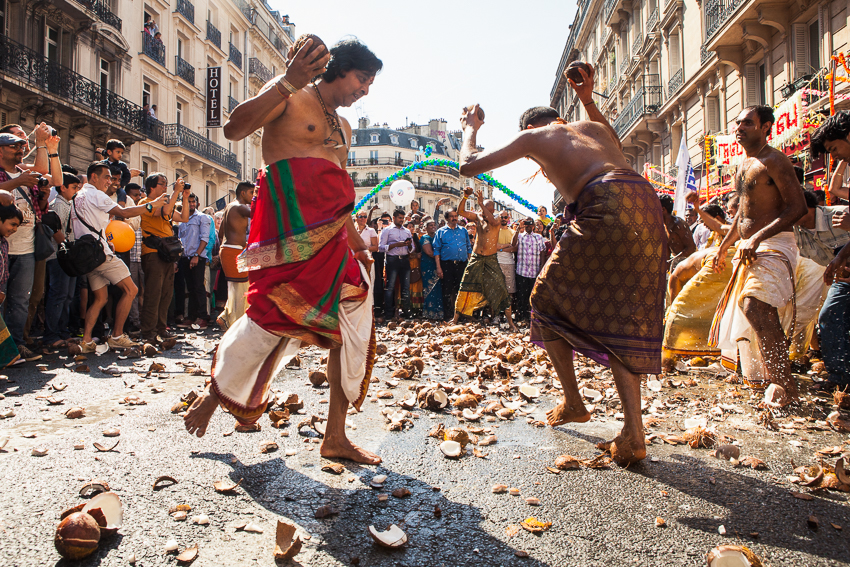 When photographing a street festival, it is very important to watch the light. While flower garlands, balloons and incense smoke look best backlit, the procession of street dancers will look best against a darker background, for example, against the buildings in the shade. For this, you may need to position yourself on the sunny side of the street and to photograph with the sun shining into your eyes, so remember to put the lens hood on to protect your photos against unwanted sun flares. 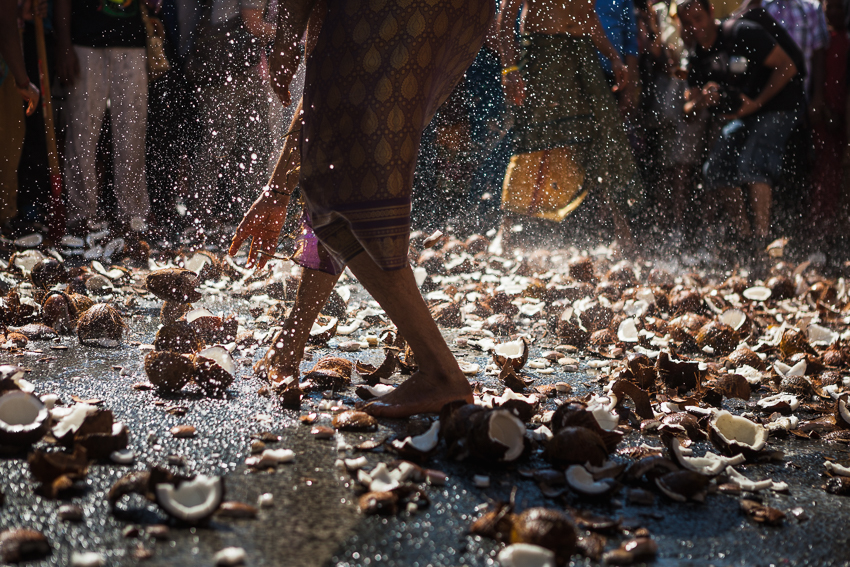 After circulating the streets in the cheerful crowd for a while, it's a good time to have a hearty lunch in one of the many Indian restaurants all around the area, and to look through the photos you took during the day to choose the most vibrant and striking ones that reflect the jubilate spirit of the Ganesha Festival.