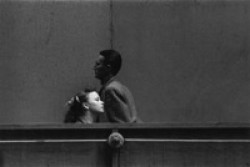 The 'rentrée' (back to school) is officially behind us, marking the beginning of the new season of cultural events in Paris after the long Summer break. The Henri Cartier Bresson Foundation is currently presenting the photography of American photographer Harry Callahan (1912-1999) in a exhibition called 'Variation'. The selection of about 100 black and while photographs gives us the opportunity to discover Callahan's favourite subjects: Nature, the city and his family.

He was not interested in story telling or narrative photography. His images were an attempt at showing his deep and personal emotion. As a result, when he photographed cities, he did not look for people's exchanges in the streets, but instead obsessively captured from various angles anonymous pedestrians lost in their thoughts. His images are a repetition and a variation of his favourite subjects. 'I just had the feeling that I wanted to keep going back to the same ideas, knowing that they would be different, yet still the same'.

My favourite series was the one he took of street lines leading into infinity, turning a simple white line into a beautiful abstract landscape.

This idea of photographing variations on a subject very much reminded me of the advice I give participants in my workshops: give yourself some assignments based on a theme (e.g., lines, grasses, trees, urban façades, etc.) and see how many variations you can photograph based on the chosen theme. It helps focussing the mind and leads to some creative images.

You have until December 19, 2010 to discover Harry Callahan's work and to get inspired for your own photographic variations.

By Sophie Pasquet on Wednesday, 22 September 2010.