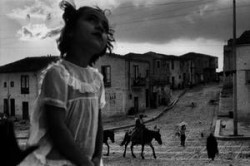 Visiting an exhibit by the famous Chilean photographer Sergio Larrain in Fondation Henri Cartier-Bresson may easily turn into another sublime adventure in the city of Paris. Not only will you see a collection of stark black-and-white images of Santiago, Paris, London and the author's beloved Valparaiso, but you'll also visit one of the art deco edifices of Paris, the elegant 'Maison des Artistes'.

Sergio Larrain's first complete photographic project on the life of homeless children of Santiago made him visible in the photographic world and helped him receive a grant from the British Council to work in London in 1958. In Europe, he met Henri Cartier-Bresson and joined the famous Magnum Photos cooperative agency. However, soon Larrain realizes that he cannot work for magazines and virtually gives up photography ten years later in pursuit of his study of Eastern culture, yoga, writing and painting in solitude.

The name of the exhibition could be translated as 'Wanderings': a photographer roaming the world in search of pure images. Larrain's complex personality can be visually recognized through a very particular outlook on the world: high contrasts, strong angles and shapes, dark shadows and direct sunlight, diagonals and triangles, purposeful 'out of focus' areas. The subjects of his photographs are often walking out of the frame; they are just as elusive and resistant to restraints as he is.

He allows his photographs to happen, only carefully choosing a frame for life as he sees it through his lens. "A good image is created by a state of grace. Grace expresses itself when it has been freed from conventions, free like a child in his early discovery of the reality. The game is then to organize the rectangle", explains Larrain.

In addition to the exhibit, the art deco style building of Fondation Henri Cartier-Bresson deserves special attention: constructed by Molinié back in 1912 and awarded the Prize for Architecture, it has been beautifully restored and adapted to museographic needs. Its ornate façade and white spiral staircase, as well as the glass roof, are a treat to photographer's eye!

There is definitely some magic in Sergio Larrain's photographs, since magic was exactly what he was looking for, whether it be in the hilly streets of Valparaiso or under the bridges of Santiago. To my mind, his magic is in compassion and in daring to live according to his own beliefs, and in using his outstanding photographic talent for these needs.