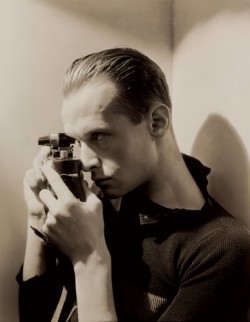 This spring, the Centre Pompidou in Paris presents a large retrospective of one of the greatest photographers of the 20th century, Henri Cartier-Bresson. This may sound somewhat official, but even if you have seen many of his works before (and I know you have!), this is an exceptional exhibit as it uncovers a much more complete and often surprising image of this renowned photographer and his remarkable career.

Over 500 photographs, drawings, paintings, films and documents are presented in chronological order, retracing Cartier-Bresson’s work throughout his lifetime. His work can be divided into three main periods: the influence of Surrealist movement in the beginning of his career, his political commitment and work for Communist press, and photojournalism on the assignments of Magnum Photos cooperative, to which he was a cofounder.

Henri Cartier-Bresson is widely known for his mastery of composition that he based on his knowledge of the proportions of Golden Ratio, as well as for his ability to capture the most significant instants, giving rise to the idea of ‘the decisive moment’. His images of historic events taken on photographic assignments all over the world, from the ‘gold rush’ in China to funeral of Gandhi in India, from prisoners of war camp in Germany to Stalin’s death in Russia, have long become classics.

However, this retrospective introduces another Cartier-Bresson, or, rather, several Cartier-Bressons. Not many have seen his series of photographs of mysterious wrapped objects or daydreamers in the streets, as inspired by Surrealism. Not everyone knows about his passion for crowds and public meetings that he saw as ‘a highly stimulating exercise in photographic composition’. Not all are familiar with his documentary cinematographic works, also presented at the show.

What inspired me most was his unique viewpoint when telling a story and his interest in visual anthropology. When people were looking at King George VI during his coronation, Cartier-Bresson was looking at people. When the world worried about political situation in USSR, he was capturing Russian men watching women in the street. Choreography, consumer society, relationship between men and machines – so many subjects drew his attention and for each one he had his own visual way of telling a story.

After many years of criss-crossing the world and being in the center of action with his camera, Cartier-Bresson moved on to a more contemplative, poetical approach in photography. The center of his interest shifted from the turmoil of historical events to the poetry of everyday life, his close ones and the objects of personal life. Just as in his earlier days, he went back to drawing, comparing it to meditation, while photography being ‘immediate action’.

Throughout the exhibit, one cannot help but to admire the man who lived his life to the fullest, the one who found his calling, developed it to the highest level of mastery, who has been recognized worldwide and who retired with a feeling that through his photography he has changed the world.