Hermione McCosh joined Better Paris Photos in 2011 and has since become one our most popular photographers. She provides photography instruction during our photo tours in Paris, and delivers portrait sessions. She is particularly passionate about photographing children. We asked Hermione a few questions to help us better understand what drives her as a photographer and inspires her as a person:

When did you start photography? 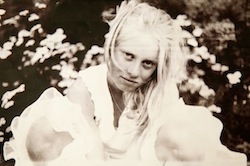 I remember doing a photo shoot with my sister at the age of about 10 years old (she was eight). I made her wear a fairy dress and we went around the garden photographing ethereal moments. I still love one of the images that I took. This was with my fathers olympus film camera.

I then studied photography at school and university. Shortly after, I was offered to work on a UNESCO project in Turkey. There were no clear objectives about what the photos would be used for, but I thought it would be an interesting project. I initially went out for a month but it was so successful I extended my stay for another six weeks. I visited each of the thirty villages in the area. This was on the European side of Turkey in the mountains by the Black Sea. Some of the villages had only about twelve people and others were small towns. All of the villages were practically self sufficient, growing their own fruit and vegetables, keeping bees for honey, picking wild mushrooms from the forest and farming crops and livestock. The photographs I took were a mixture of reportage and portraits. I was incredibly lucky in the fact that people trusted me and I was allowed anywhere. Eventually the photographs were made into a guide book to help promote tourism in the area.

What kind of photographic style were you attracted by at first?

Julia Margaret Cameron, who was one of the first women photographers, was and still is a huge influence. Cameron lived at Dimbola Lodge on the Isle of Wight where I also had family. It is now open to the public and I was able to visit and see where she worked. She did portraiture and photographed great writers and poets of the day including Lord Tennyson and Charles Darwin. She also did many portraits of children which were theatrical, ethereal, softly lit and with pre-raphelite influences.

How would you describe your current photographic approach?

Every day is different. I work outdoors 80% of the time and nothing is ever really the same. Being in Paris, 'the city of light', I have learnt to appreciate the constant change in the sky, the light, the colours, the people and of course the weather! The exciting thing with working outside is you never know what is going to happen next. It will dramatically poor with rain for half an hour and then sun rays will shine through the clouds and the light can be spectacular. With both rain and shine there are photographic opportunities!

Paris is a theatrical backdrop in itself. Down every street, lane or alley there is something else to discover. The world becomes the stage and life is one long play. It brings me huge amounts of joy to be able to capture isolated moments on camera. This could represent joy, laughter, sadness, loneliness or even anger. All parts of a humans personality and their moments in life. I want to catch realties behind the theatre scene.The people, whether they know it or not are the protagonists of the story. They are making the images come to life intriguing the reader to look twice at the photograph and study it in more depth.

Before pushing the button, how do you build an image?

Image by Hermione McCosh
I simplify the image so I just see the geometrics in the picture, the lines and the shapes. I decide the exact point I want the focus to be on. This is often the eye if I am taking a portrait. I look to the edges and what is happening behind my subject to make sure that there is nothing distracting. This might take ten minutes or I might only have seconds to make it happen.

How do you know that an image is the one? How do you make your selection?

You sometimes just know. I remember doing a shoot with a model and two horses. Nothing was really coming together and it was only when I got closer and their heads were in a z shape across the image that I realized 'that's the one!' and we stopped after that.

For you, what is a good photograph?

Image by Hermione McCosh
A photograph that makes you explore it and that perhaps takes time to appreciate it. Sometimes there is more meaning than what first meets the eye. The lines and patterns in the image come together to lead you around the photograph each step of the way. Something that intrigues the reader to want to look again.

Do to take photos for yourself or for others?

For me.... and then it makes me very glad when other people like my images.

What are your sources of inspiration? Which photographers most influenced you? 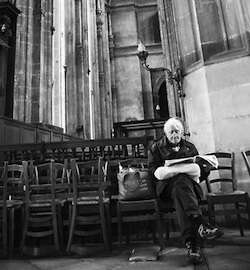 Man in Church, by Hermione McCosh

I already mentioned Julia Margaret Cameron. I think Annie Leibovitz is a wonderful theatrical photographer, I studied André Kertez and Henri Cartier-Bresson at university and both are great street photographers. I assisted John Swannell and Yves Gellie who were really fantastic artists and huge inspirations. Then there are the less well known photographers whose blogs I follow like Kendra and Matt at Summer Street photography and Annabel Braithwaite at Belathée photography. I also love impressionist paintings- their very small brushstrokes could perhaps look just like digital pixels! I also enjoy simply walking around and seeing different elements in life and wondering the best way to photograph them. Whether I photograph in the streets or at a formal event, it is often the most mundane subjects and fleeting moments that can make a great photograph.

Thank you Hermione, for sharing these thoughts with us. More of Hermione's photography, both or Paris and portraiture, can be found on her profile page.