Lightroom Tutorial: How to Recover Details and Reduce Fringing in a Highly Contrasted Image

Highly contrasted scenes are not easy to photograph: even though the technology is advancing rapidly, our eyes still see more than we happen to capture on our camera’s sensor. When traveling, you may find yourself in different situations: taking a photo of interesting architecture against a very bright sky, capturing narrow medieval streets with strong shadows or a tropical sunset under the palm trees. While you can always opt for underexposing your image and only leave the silhouettes, for some photos you may prefer to keep the details in both highlights and shadows. In this Lightroom tutorial you will learn how to recover maximum information from a highly contrasted scene with minimal loss of quality.

The original image was taken by the Atlantic Ocean in Western France. The colours in the sunset sky are pastel and the ocean reflects them softly. I decided, however, to include the glowing curve of the fence surrounding the cliffs into my image. This resulted in a highly contrasted image where both the sky and the ground are clearly lacking details: 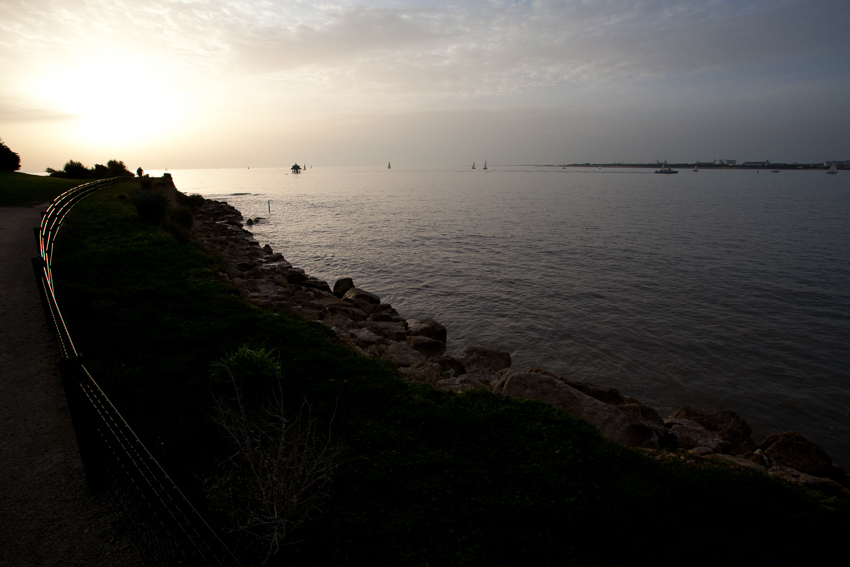 After importing the image into Lightroom 5, I take it into the Develop module and press the letter J on the keyboard to see the clipping, checking the histogram at the same time. In the image below you can see that the sun and the area around it is definitely too bright (highlighted in red), whereas most of the ground around the fence is in deep shadows (highlighted in blue). 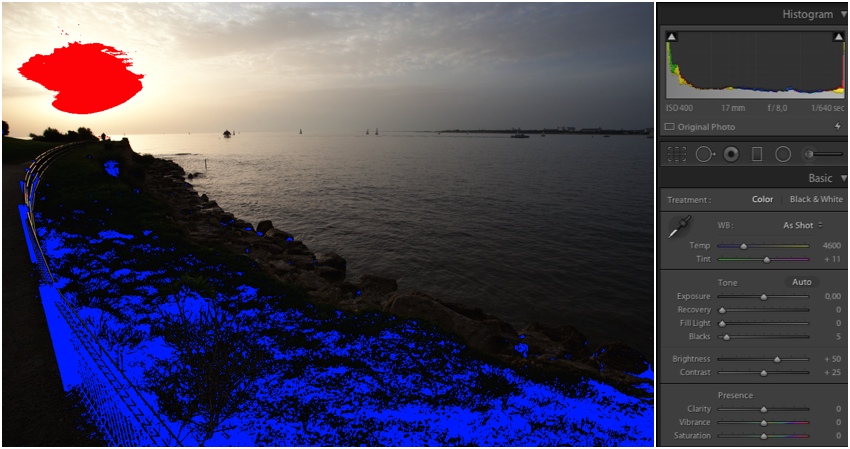 Before making any adjustments, in Camera Calibration tab I select Process 2012 that deals much better with highlights and shadows than the previous 2010 version (read more on this technology). This action helps to reduce some of the clipping, however, it is still far from perfect and more adjustment is needed. I reduce the highlights to -34, add some light in the shadows to +56, and add a touch of whites to +13. While doing this, I always keep an eye on the histogram to make sure I do not overdo it. At this point most of the details are recovered, so I balance the contrast out by adding some blacks to +24. Here is what the image looks like now: 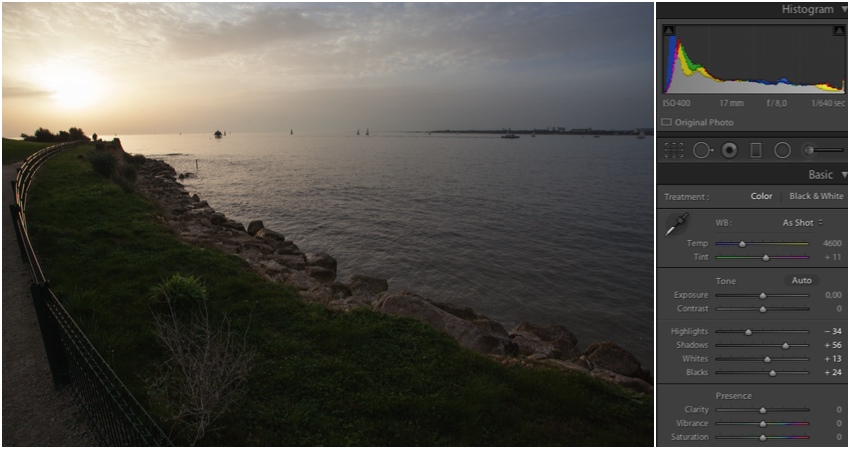 When shooting against the light, most lenses produce an optical effect called chromatic aberrations, often seen as green and purple fringing in the images. It is especially noticeable closer to the edges of the image when it is enlarged to 100%. To neutralise the green and purple halos, I use Defringe tool in the Lens Corrections box under Color tab. Some fringing is easy to correct by simply taking an Eyedropper tool and clicking in the purple or green areas in the image. However, if the fringing is particularly severe (like in this case), toggling the sliders manually until you are satisfied with the result will do a better job. 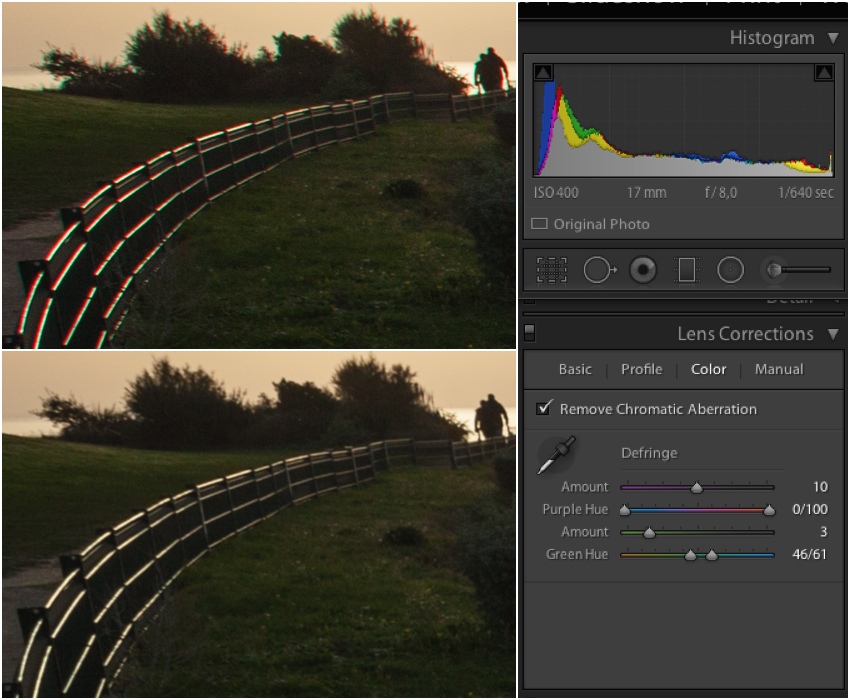 Note that if your highly contrasted image was captured in RAW format, you are able to regain most of the details out of it than if the image is in JPEG format. Below is the comparison of the RAW vs. JPEG files of the same image after the editing: because the JPEG format compresses the image data, the final result looks harsher, noisier and less pleasant than the one edited in RAW. 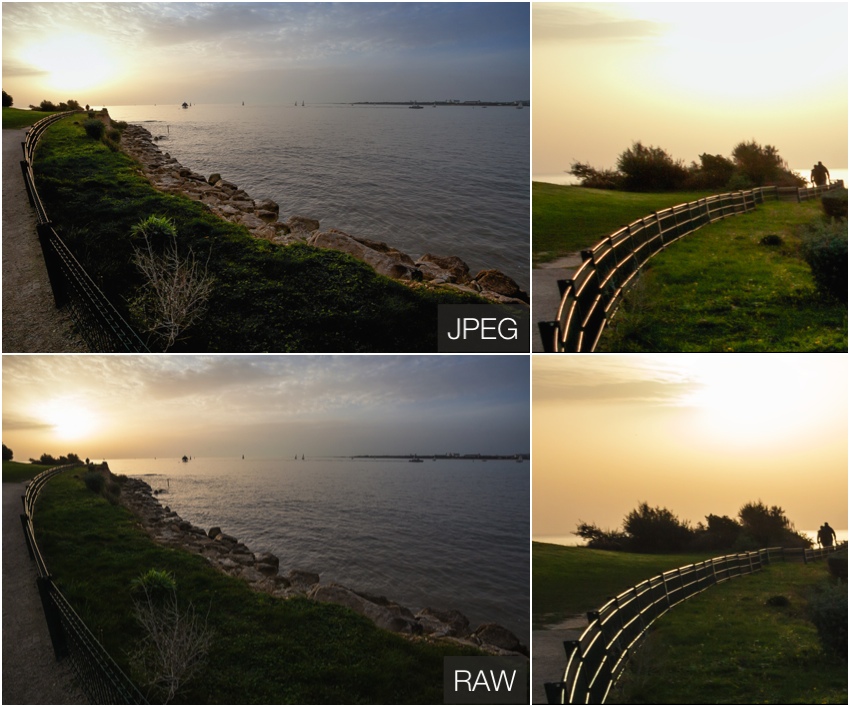 After correcting the green and purple fringing, I added a touch of Vibrance and Clarity to the image and here is the result that comes from a seemingly unrecoverable original image:

Let us know if this works for you and share your results with us!