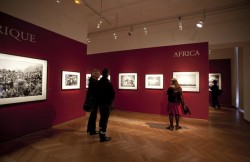 Well that is what you get at La Maison Européenne de la Photographie, which is currently hosting "Genesis", the greatest photographic project of the world-renowned Brazilian photographer Sebastião Salgado. After a tremendous success in London earlier this year, it continues to amaze Parisians and visitors to the city. The show is divided into five geographical sections: the south of the planet, Natural Sanctuaries, Africa, the north of the planet, Amazonia and Pantanal. Each room has its theme and its background color, from olive green to grey, from blue to dark red. Well-thought scenography and presentation reinforces the stark beauty of the images.

A massive collection of large format black-and-white photographs presents breathtaking landscapes, wild animals and indigenous peoples, in a world that has not been yet touched by modern life as we know it. The viewer sees our planet in its pristine condition as it existed for thousands of years. However, while marveling at magnificent views or striking portraits, one cannot help but think of lands destroyed by pollution, disappearing animal species and endangered lives of primitive tribes. So why does Salgado show us the world that seems to have never been at risk? Would it not be more effective to show the horrors of pollution to attract more attention to the problem?

"I wanted to photograph the beauty of things born again", explains Salgado in one of the interviews.

As a photojournalist and environmental activist, Salgado believes that the photographer must be connected to the evolution of his own environment and the society that surrounds him. Together with his wife, Lélia Wanick Salgado, he is working on the restoration of a small part of the Atlantic Forest in Brazil. A short presentation of this reforestation project, Instituto Terra, also makes a part of Genesis exhibit and is directly linked to the main theme: if two people can make wonders on a piece of land, how much more could be done if more people on different continents unite?

My personal impression was one of amazement, almost a difficulty to believe that one person could produce a body of photographic work so complete, so perfectly done, so consistently stunning to the smallest detail. This project is definitely the most important in Salgado's career, and I am glad to have been able to see it in person.

Genesis is a tribute to nature's splendor, a quest for the origins of the world, a reminder that there are fewer and fewer places on Earth that remain in their original state and an encouragement to action to restore what we have lost.

A practical tip: do not underestimate Parisians' love for art – come earlier in the day, otherwise you risk spending an hour or two in a waiting line!