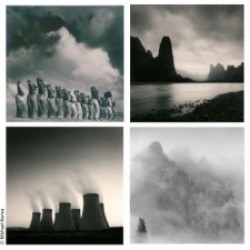 Until 24 January 2010, the Bibliothèque Nationale de France (BNF) is presenting a retrospective of Michael Kenna's photography. The exhibit includes images from his early work inspired by Bill Brandt through to his more recent images from various countries such as Japan, India, China and more.

The black and white photos along with Michael Kenna's minimalist compositions and sense of design make his work both timeless and modern. Playing with light and texture, Kenna is a master at creating dream-like images, drawing the viewer into his work and making it easy to imagine being in there alone.

His subjects vary from romantic English landscapes, structured Versaille's gardens, peaceful Japanese coastal views, to industrial environments or cityscapes. I enjoyed many of his natural landscapes in which it is easy to get lost and daydream. Surprisingly, I also found myself drawn to his series of power plant cooling towers: a subject that would hardly appeal to me otherwise, but his abstract compositions and simple lines combined with a foggy atmosphere created powerful images that gave me a deep sense of contemplation.