Paris Behind Closed Doors: a Visit to the Hôtel de Ville

When in Paris, have you ever wondered what is hiding behind the closed doors of its numerous magnificent buildings? While museums and churches are open to the public, certain edifices first of all serve their direct purpose and can only be visited during Heritage Days in September. One of such venues is the Hôtel de Ville de Paris, the Town Hall of the City of Paris. Besides Heritage Days, when the building gets very crowded, the Hôtel de Ville organises guided group visits several times a year, balancing them with the busy schedule of local administration. This year, I had the chance to be a part of such a visit, camera in hand and I can't wait to share my discoveries with you! 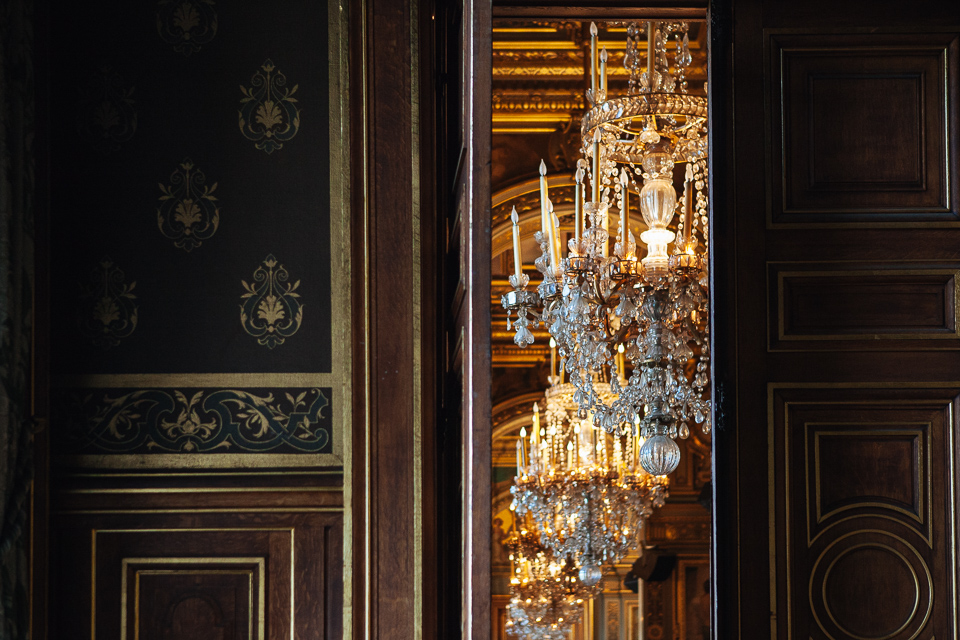 Located in the heart of Paris between the Seine River and Le Marais area, the Hôtel de Ville has served as the headquarters for the municipality of Paris since 1357. It houses the Mayor of Paris and local administration, and is regularly used as a venue for large receptions or exhibits. The edifice of Hôtel de Ville was burnt down in 1871 during Paris Commune and was rebuilt anew in 1892 within its old stone shell in its original French Renaissance style. The new interior was lavishly decorated in the style of late 19th century and remains well-preserved. 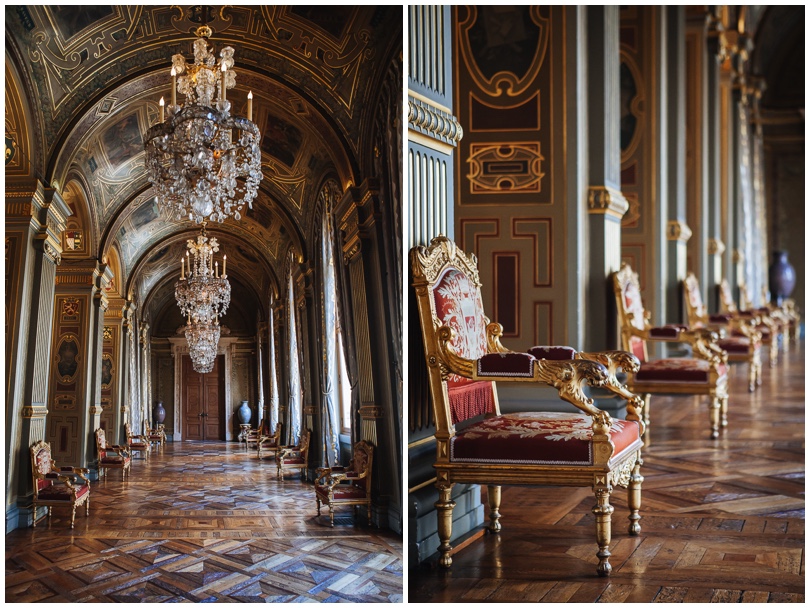 On a sunny Wednesday morning I join the group of visitors mingling at one of the entrances, and we enter into the magnificent building. I plan to capture both the entire rooms and some details, so I have my most universal lens Canon 24-70mm with an aperture of f/2.8 that allows to photograph in lower light. The group is greeted by a highly knowledgeable guide, who not only knows the entire building like the back of her hand, but can also easily answer any question on the history of Paris and the composition of its present and past governments. 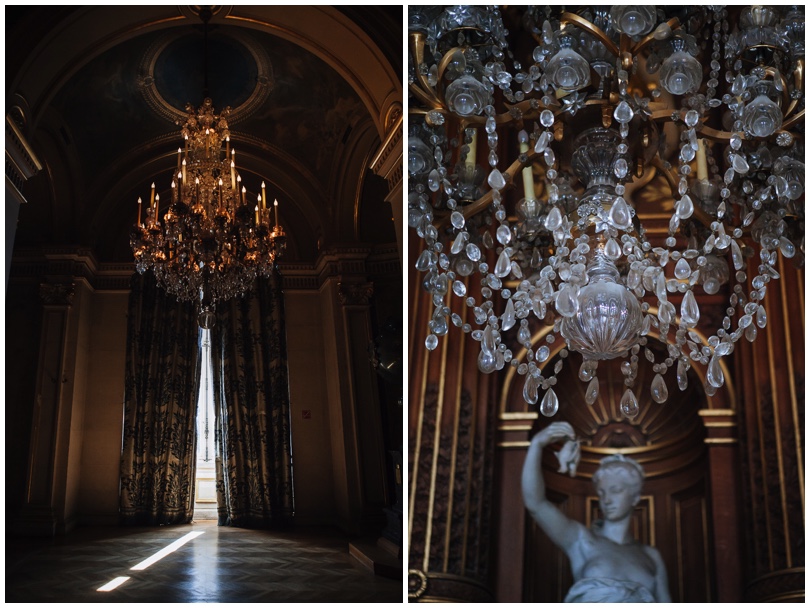 First stop is at richly decorated Escalier d'Honneur (Stairs of Honour), consisting of 50 white marble stairs covered with an immense rug. I wait until the group goes further to capture the magnificent hallway and two large mirrors facing each other on both sides of the stairs. The best spot to see the "mirror corridor" is right in between the mirrors: I photograph slightly upwards to avoid having my own reflection in the photo. 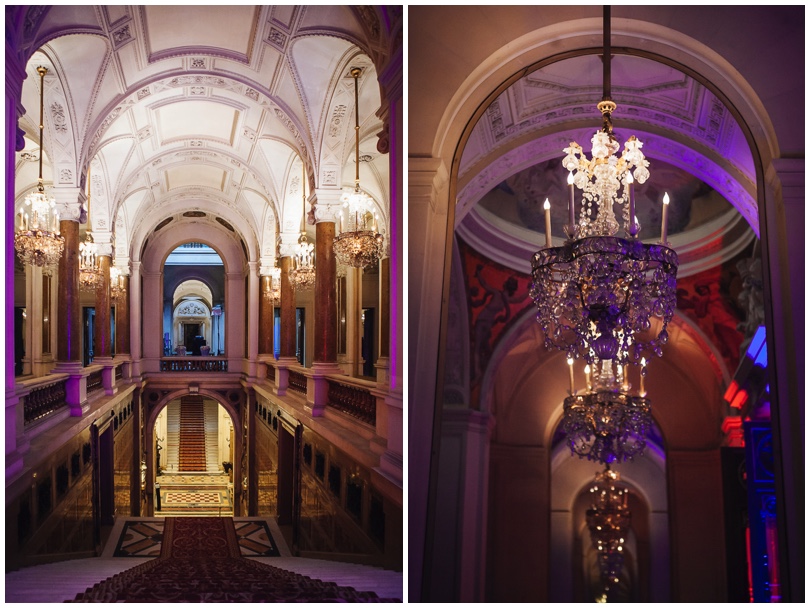 Then we move on to the sumptuous Salon des Arcades (The Hall of Arcades). Covered in paintings and gold, the large room is divided into four parts that symbolise industry, commerce, arts, and sciences. A wide-angle lens is of great help when capturing the painted ceiling with its chandeliers, or the entire room with its ornate fireplaces. 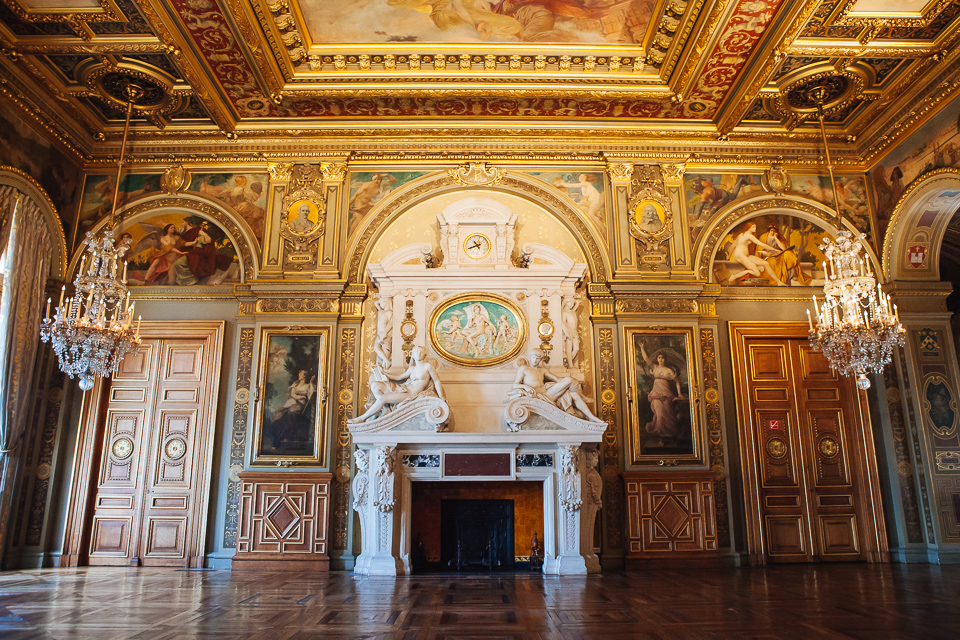 As I listen to the stories of the City of Paris, my eyes are searching for the best shooting angles and analyse the light. Traditional French interiors (as well as exteriors) are often symmetrical, so I try to align myself with the axis of each room or corridor to enhance the symmetry in my photos. As we walk through Salon Jean-Paul Laurens, containing six monumental paintings, and Salon Georges Bertrand, dedicated to agriculture, I notice lavishly decorated ceilings, gold plated ornaments and Baccarat crystal chandeliers. I try to sneak into each room before the rest of the group gets there for a few shots, and then, when everybody is already in, I focus on the ceilings and details. 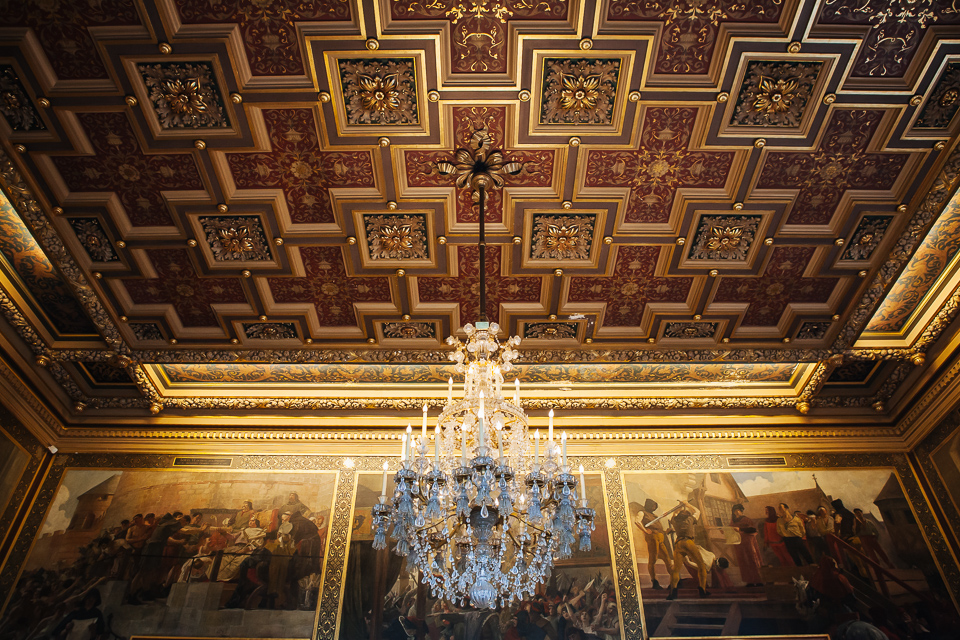 The biggest and the most awe-inspiring room is Salle des fêtes (or the Hall of Festivities), where a rehearsal for a reception later in the day is taking place. This room is a copy of the Mirror Hall of Versailles, a 50 meters long space with large windows along one wall reflecting in the mirrors on the opposite wall. Today, however, the windows are covered with curtains and the coloured lights are on. As soon as I find a spot right in the center of the room (symmetry is the key!) and take a few shots, the lighting suddenly changes and the entire room is transformed. I realise how lucky I am to be at the right spot when this happens and capture several photos with different lighting: 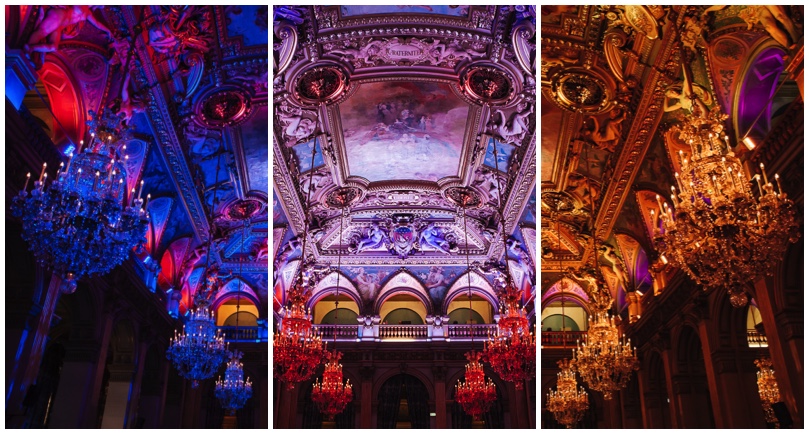 The entire visit lasts a little more than an hour. This gives everyone enough time to learn more about the Hôtel de Ville and to take some photos. After a few more rooms and several staircases, we all leave the building thanking our guide for the wonderful time.

Tips on photographing the traditional interiors: 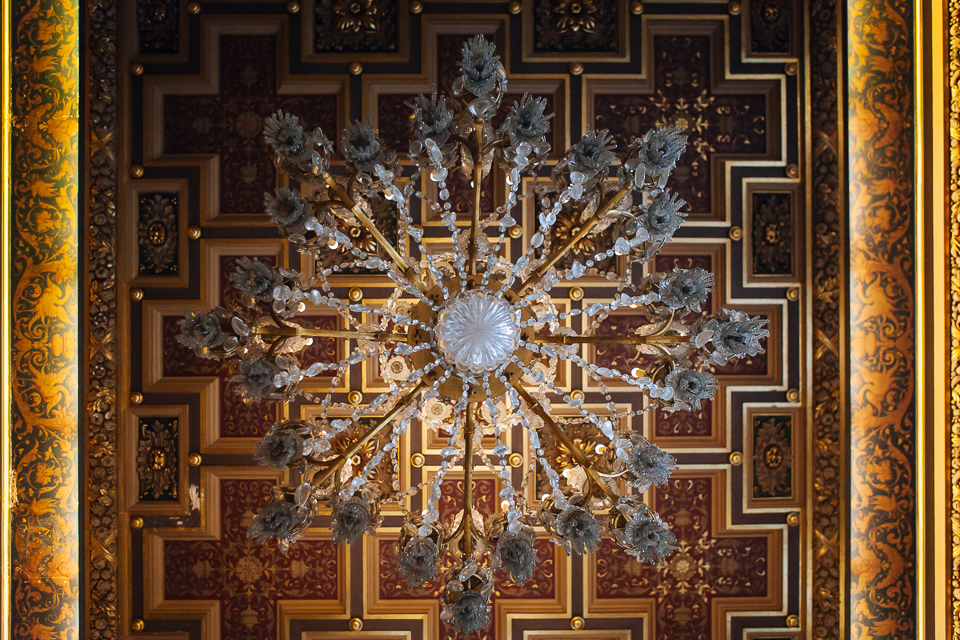 If you are interested in visiting the Hôtel de Ville, check for guided visit dates on the official website (a reservation of at least 2 months in advance is highly recommended), and share your photos of impressive traditional interiors with us!