Another year has passed and the Fire Monkey has replaced the Wood Goat... Yes, that's right: the Chinese New Year has arrived and the carnival is back in the streets of Paris! It is always so much fun photographing street events and festivals, so I simply could not miss it. After capturing dragons and firecrackers against the traditional Parisian backgrounds of the Marais in 2015, this time I decided to head to the 13th district of Paris, the very heart of the Chinese community. The show promised to be truly flamboyant, if it wasn't for those rain clouds on the horizon... but first things first. 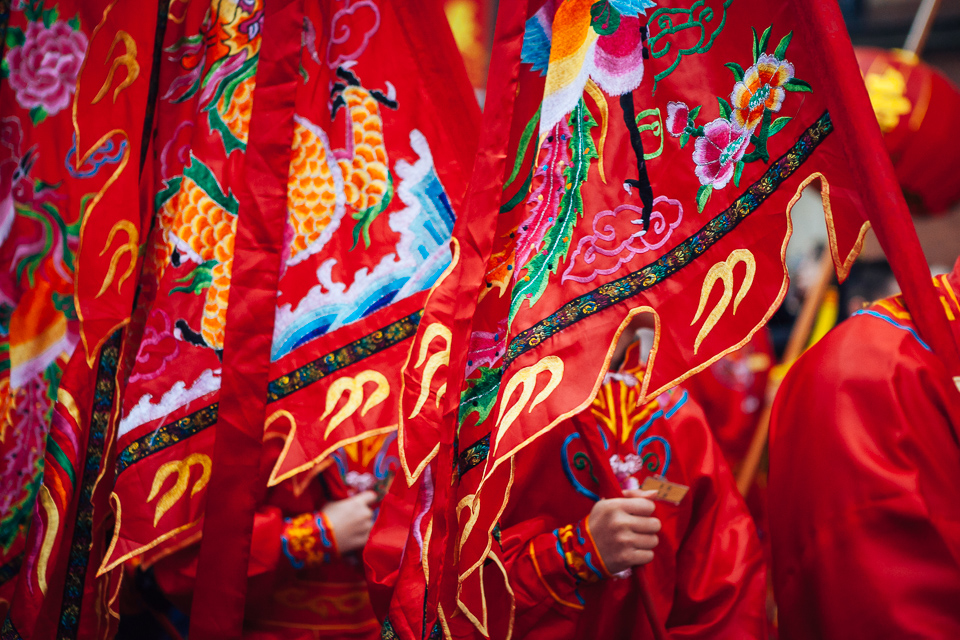 The 13th district of Paris is situated in the South East of the city and is not often visited by tourists. It is one of those few areas where Paris looks just like any other big city in Europe: modern high-rise buildings, wide boulevards, shopping malls... Combined with Asian markets and restaurants, Chinese writing and red lanterns in the streets, it looks like a little piece of China in the middle of France, and at the same time it is yet another face of the iconic City of Light. 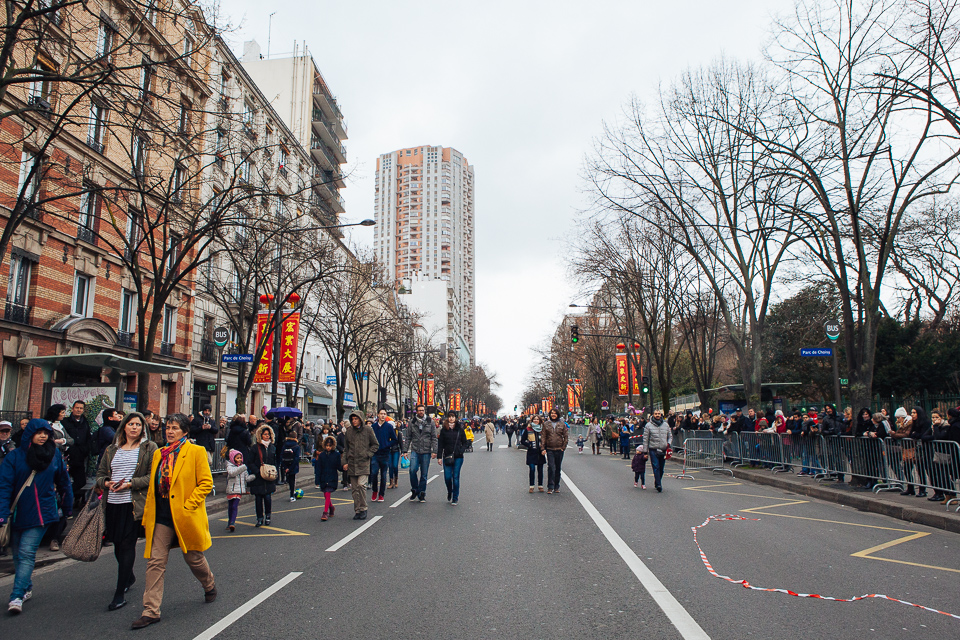 The celebrations were announced to start at 1 pm on Sunday afternoon and continue until sunset at 5 pm. I arrived at Place d'Italie and simply followed the crowd towards avenue de Choisy and a nearby park bearing the same name. The entire avenue was closed for traffic and fences were placed on both sides to separate the spectators and the participants. As a photographer, I wanted to be right in the middle of action: staying behind the fence was simply not good enough. After some exploration, I found a strategic spot by a road sign in the middle of the avenue that also allowed me to be slightly higher than the majority of the people. In the meantime the sky was getting darker and darker... 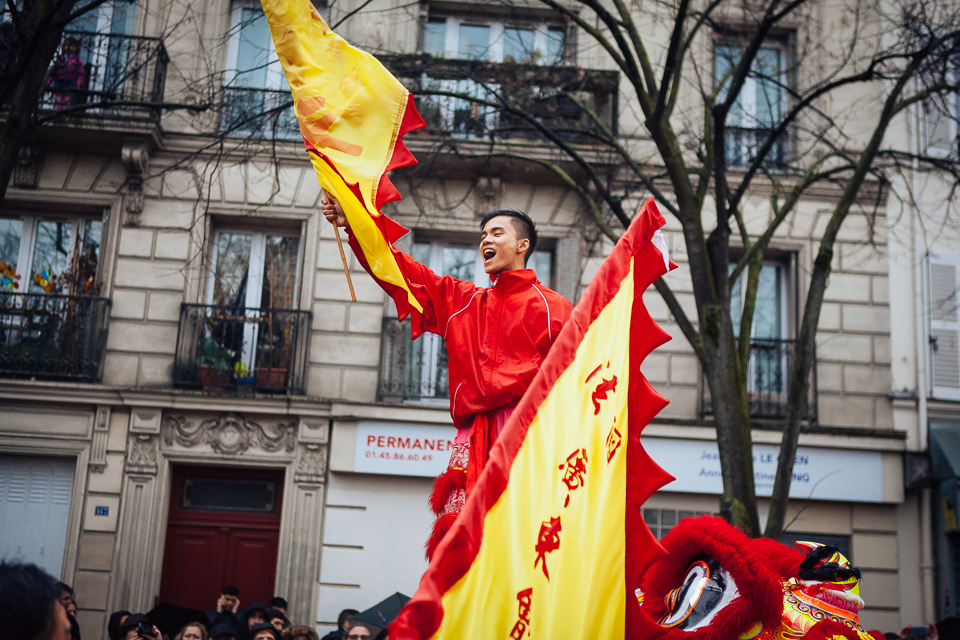 Fifteen more minutes of mingling and anticipation, and the carnival began. At the very same moment, first raindrops hit my skin and I already knew that this story will be about Chinese New Year celebrations in the pouring rain. Have you ever seen a dragon stopped by a drizzle? Neither have I, and so the dragons arrived! Carried and animated by several men at once, golden and silver beasts were floating above the streets of Paris announcing the arrival of the year of Monkey. 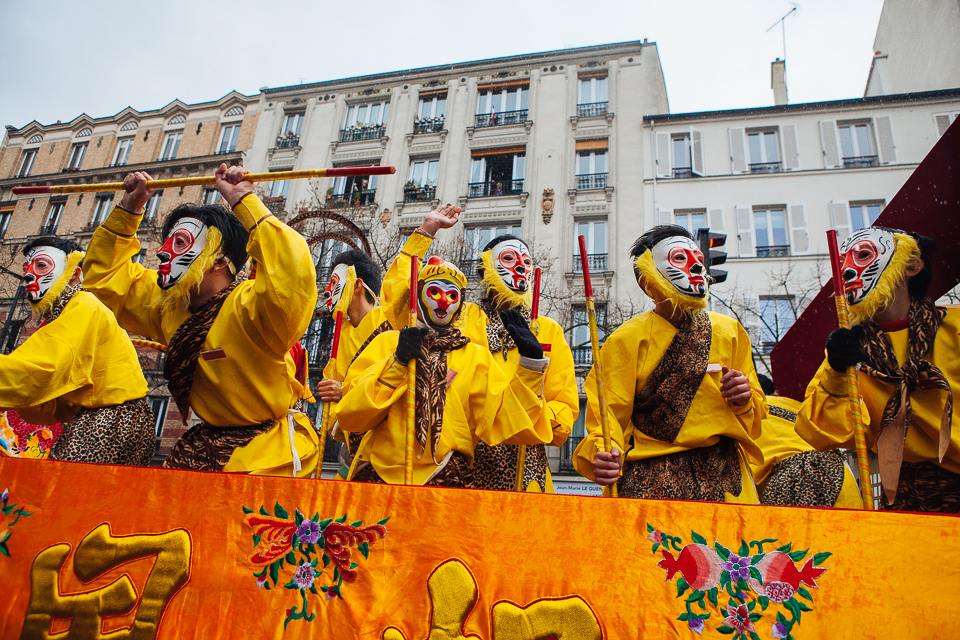 (On a side note: Chinese people believe that people born under Monkey sign are ambitious and adventurous - a good combination of qualities for any travel photographer!) 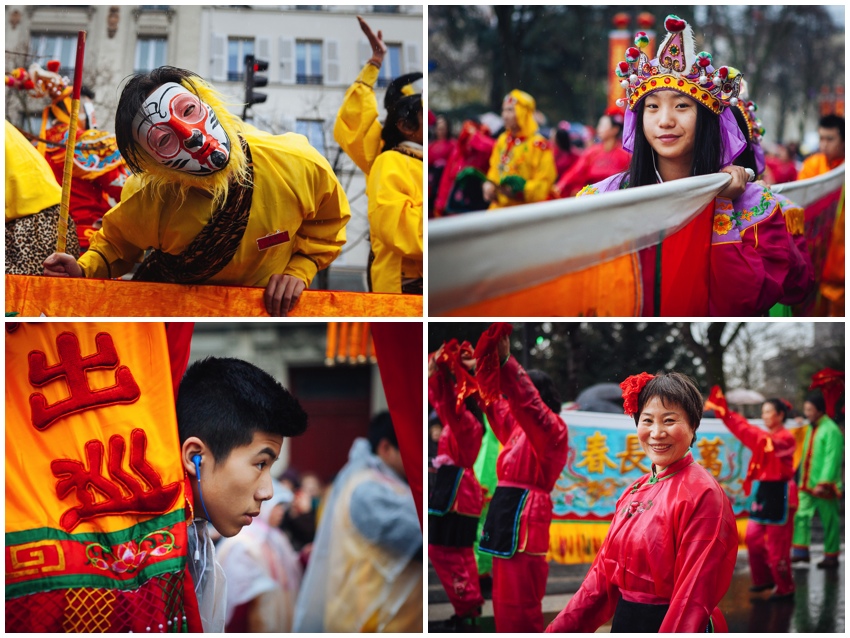 Even though it was bucketing down, the procession was loud and colourful, with bright red and yellow colours prevailing. Wet surface of the road became black and shiny, and I kneeled to catch some reflections of the ornate costumes in flashy colours. This also helped me to avoid other photographers getting into my viewfinder, as well as provided a stronger perspective. I also captured some portraits of the smiling carnival participants, as well as details, such as music instruments and elements of elaborate costumes. 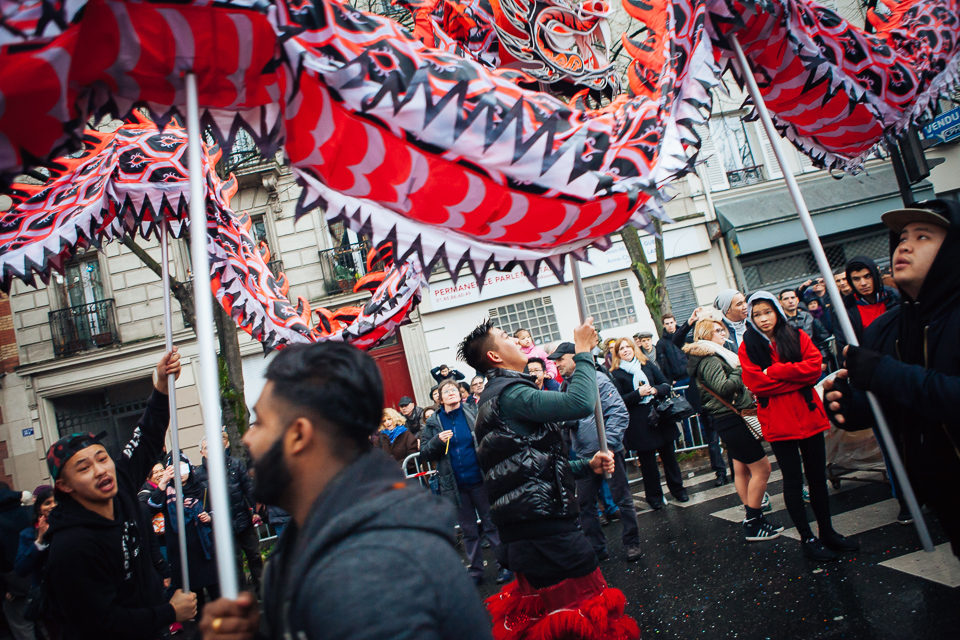 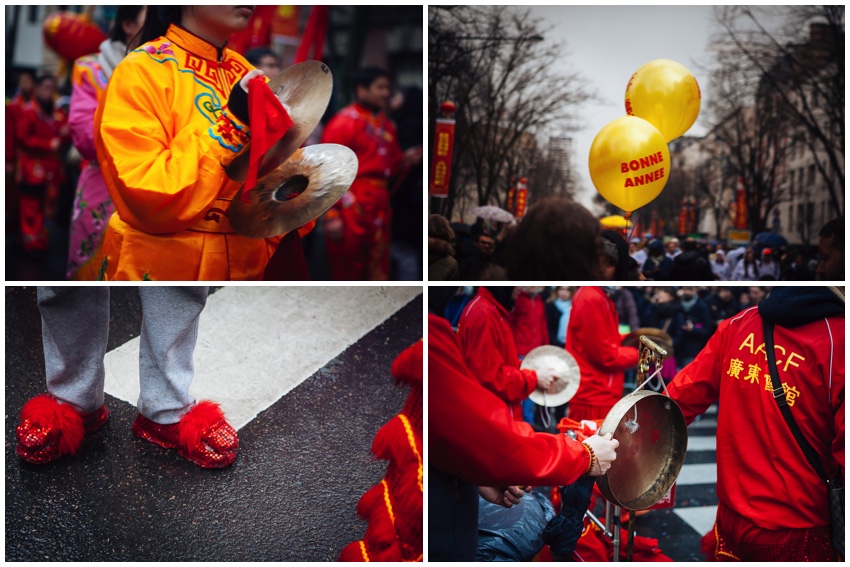 As to the lens, I brought my favourite Canon 24-70 mm that also has a good lens hood, protecting the lens not only from sun rays, but also from the rain drops. Most of the time I photographed in Aperture priority mode, pushing the ISO to a very high number (ISO 2000), as I intended to keep the shutter speed fast enough to stop the motion on a rather gloomy day. The apertures I used varied from f/2.8 for close-ups and portraits to f/8 for larger groups of people. Last, but not least: if the forecast promises rain, remember to protect your camera! 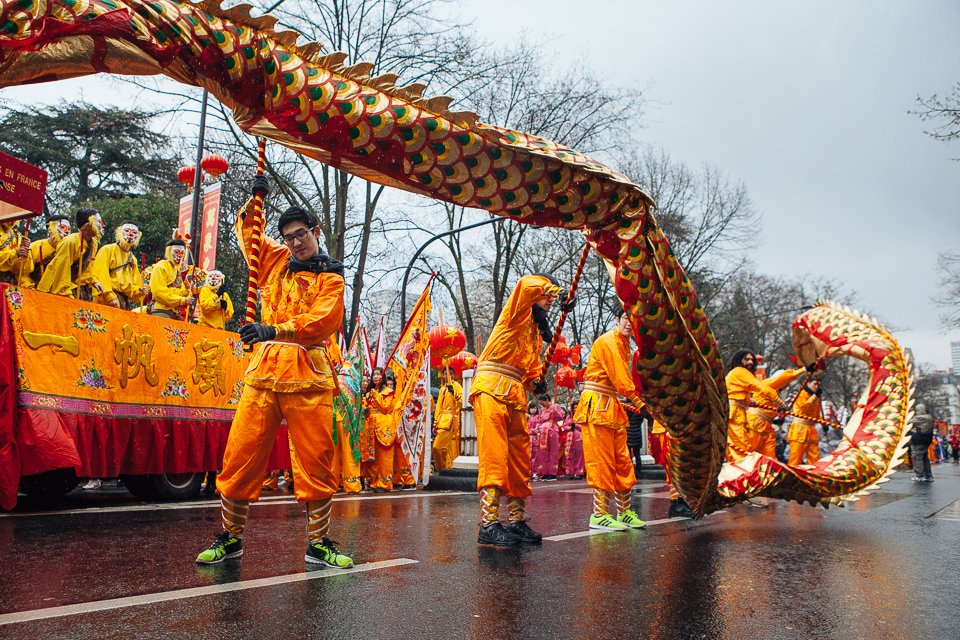 After about an hour of dancing, making music and various noises, spitting coloured smoke and burning the incense sticks, the carnival moved on further to the streets of the city. Completely drenched but happy, I ended the afternoon with a bowl of hot soup in one of many Chinese restaurants of the area. Time to get ready for Fire Chicken Year in 2017!