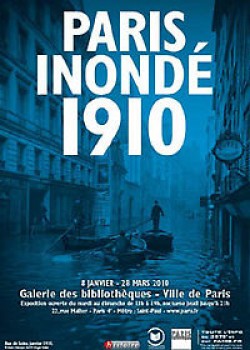 A hundred years ago this week, the Seine river flooded the city of Paris up to 8.5 meters! Paris looked more like Venice and most of the major monuments were affected. Reporters and photographers came from everywhere to record this historical moment, making it the first flood photographed and documented. To commemorate the anniversary, a number of exhibits are currently taking place in the French capital. The Gallerie des bibliothèques presents a comprehensive exhibit with photos, newspaper clippings, postcards and posters, while the Louvre des Antiquaires also offers a photography retrospective of the event. This is by the same token a good reminder that a flood might still happen and - if we believe experts - it might be even worse than the great 1910 flood.

The Gallerie des Bibliothèques presents over 200 documents retracing the great flood. Numerous original photographs show unusual scenes of Paris: people fleeing their apartments in precarious boats; horses knee deep in water doing their best to pull carts; and crowds walking on shaky elevated wooden boards. Other documents such as posters, paintings, film footage and press articles make a good supplement to the photographs to understand the full impact this flood had on the life of Parisians and the people living outside the capital.

Patrice de Moncan, a well known Paris historian, also presents a smaller exhibit on the great flood at the Louvre des Antiquaires. The photographs shown here are true historical documents that were first presented in the 'Journal des Débats' in 1910. The exhibit is punctuated by interesting anecdotes, such as the one reporting on how garbage had to be collected by boat and how orange peels dotted the water everywhere, reminding us of the importance of the fruit in Parisian life in those days!

The photographs presented in these two exhibits are true documentaries of the period rather than artistic statements. They show us the extent of the damage and make us wonder how the next flood will affect the city, as there is no question that it will happen again. If you want to feel like a true Parisian and find out what the Seine level is like, look at the statue of the Zouave soldier on your next walk on the Alma Bridge. This serves as the unofficial measuring instrument to check the water level. If the Seine runs below the feet of the soldier, there is no risk of flood. If the water starts running above his feet, that means trouble... During the great 1910 flood, the water reached the Zouave's shoulders!

If you are limited in time and wondering which of the two exhibits you should see, keep in mind that the Gallerie des Bibliothèques presents a number of additional written documents (in French) and will most likely be quite crowded. On the other hand, the one at the Louvre des Antiquaires is smaller, presents mostly photographs and is usually not very crowded.

For a virtual version of the exhibit at the Galerie des Bibliothèques, visit http://www.inondation1910.paris.fr.