Stages of Sunset and Twilight in Porto: from "Golden Hour" to "Nautical Twilight"

Sunsets are among some of the favourite photographers' subjects. When the sky turns red and orange and everything around seems magic, even the most worldly-wise photographer finds it hard to resist taking a photo or two. For truly captivating photos of sunset some preparation is needed: this is where the notions of "golden hour", "blue hour", "civil twilight" and "nautical twilight" come into play. I recently had a chance to witness a spectacular sunset from the top of the Dom Luis I bridge in Porto, Portugal, and here is what came out of it...

The different light phases depend on the position of the sun above or below the horizon. Knowing this, I checked the times for the city of Porto using an online calculator: on July 9th, the sun was going down at 9:10pm, civil twilight lasted from 9:10pm to 9:44pm, and nautical twilight from 9:44pm to 10:26pm. At 8:00 pm I headed towards the vantage point I had scouted in advance: the two-level 45 m high Dom Luis I bridge that links the city of Porto to the city of Vila Nova de Gaia on the other side of the Douro river. After climbing a few hundred stairs, at 8:20pm I arrived on the top of the bridge, camera in hand. 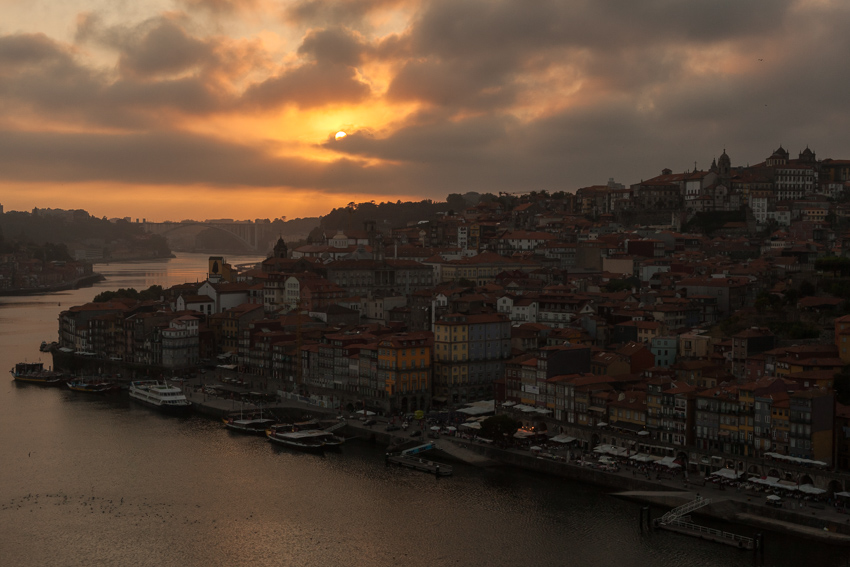 The "golden hour" starts when the sun is at 6° angle above the horizon or lower and continues up until it reaches -4° angle below the horizon, when the sun is no longer seen but the sky is still lit with a warm golden light. Warm tones dominate in the sky, the light is soft and diffused. There is, however, still a lot of contrast between the very bright sky and the much darker city, as the street lights are not on yet. This is the best time to capture the silhouettes of the cityscape against the sky: you can use the exposure compensation (-) to decrease the amount of light and enhance the bright colours of the sky. 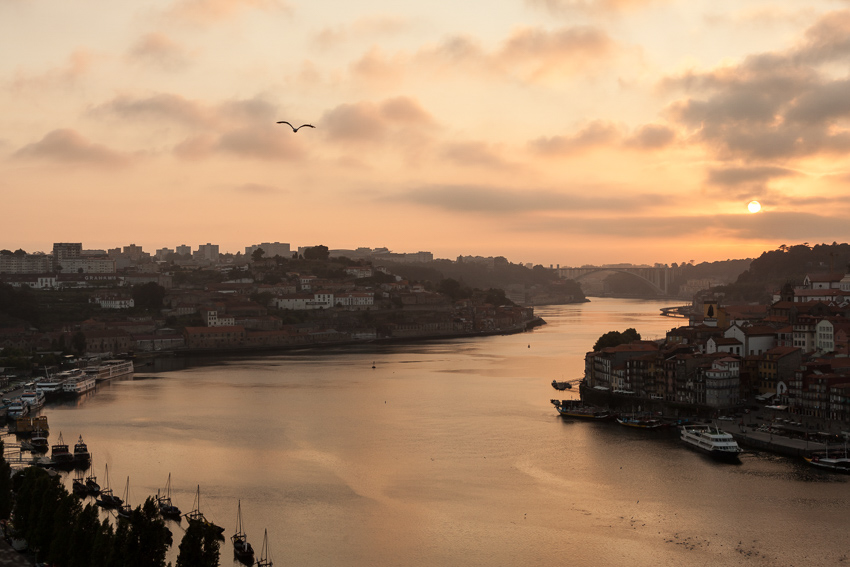 It was a very sunny and warm day in Porto, however, as the sun started to go down, some clouds moved in from the Atlantic ocean a few kilometres away. The sun was playing hide and seek with the clouds, sometimes leaving me without any of the golden hues I was hoping for. Luckily, the clouds were not very dense and allowed for the orange disk of the sun to peek through from time to time. It made the colours more subdued than I was hoping for at first, however, easier to photograph due to the light veil that reduced contrasts. 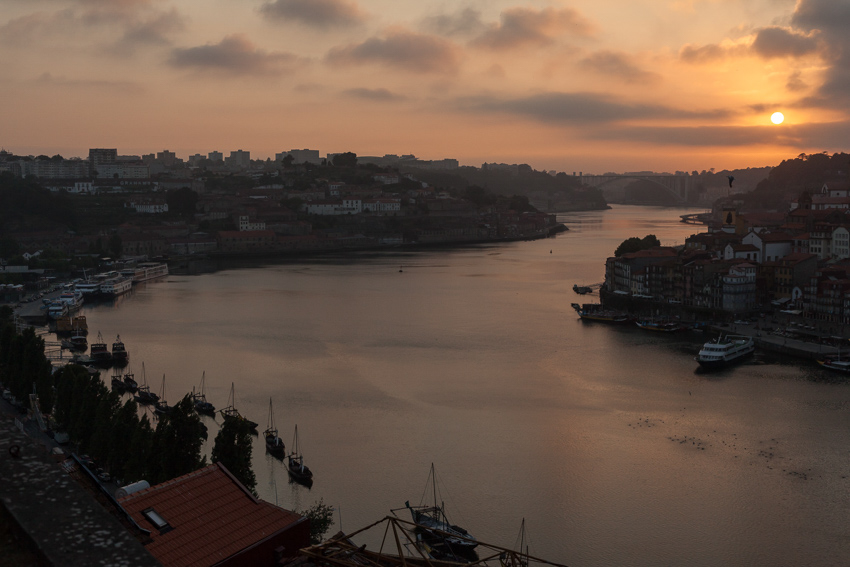 As the sun went lower and closer to the horizon, the warm yellow and orange hues started to change into colder pink and magenta tones. The following image was taken only a few minutes after the previous one and you can already see the change in tones: there is noticeably more blue in the shadows. 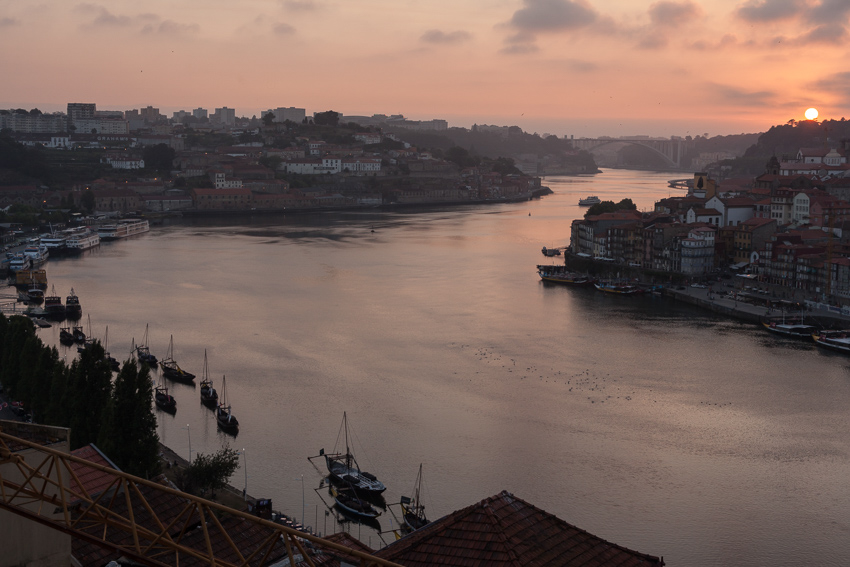 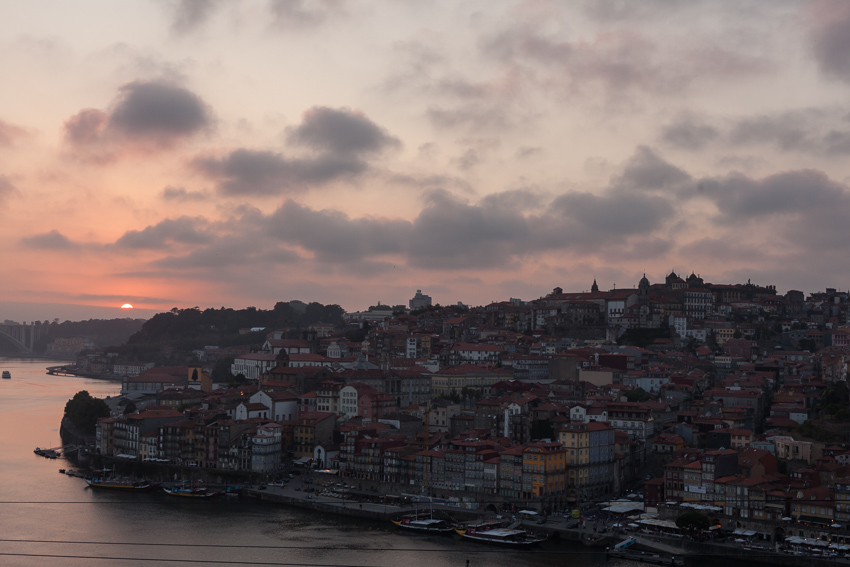 As soon as the sun disappears behind the horizon and travels to the angle of -6°, the civil twilight starts. Warm light from the sun is still visible, as it illuminates the upper layers of the atmosphere: there is enough natural light to distinguish the horizon line and other objects easily. A nice gradient can be seen from deep blue through light green and yellow into orange and magenta hues.

Every sunset depends on weather conditions. As the soft oceanic clouds surrounded the sun, all the colours suddenly disappeared and it seemed that the light and colour show was over... This is the time when an inexperienced photographer may fold the tripod and head for dinner, missing another great part of the sunset: the "blue hour". 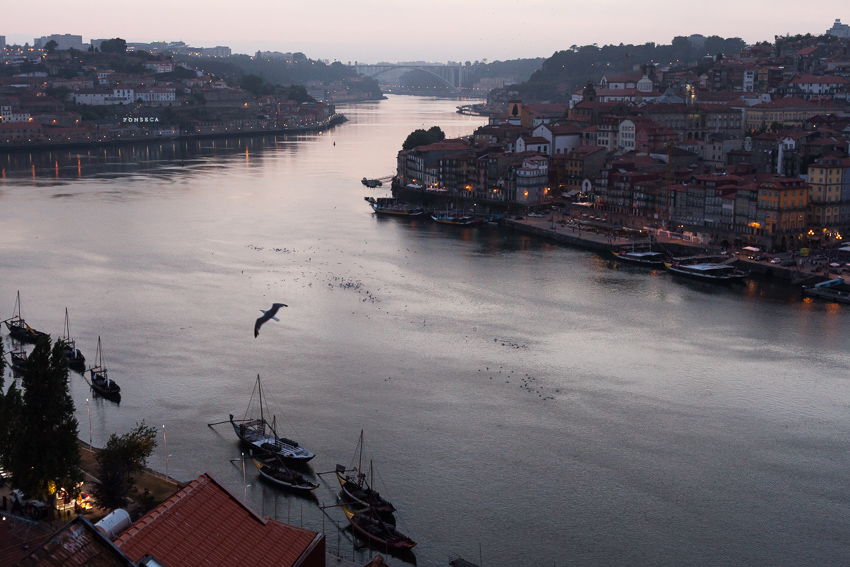 The "blue hour" starts as the light gets cooler and the sun is positioned at an angle between -4° and -6° below the horizon. During the "blue hour", the sky gets deeper, richer blue hues, the colours look more saturated, the gradients more obvious. Even on a gloomy overcast day, the "blue hour" is the time when one can get the most colourful photos: the sky turns from grey to blue and the street lights start to illuminate the city, bringing the warm hues back. 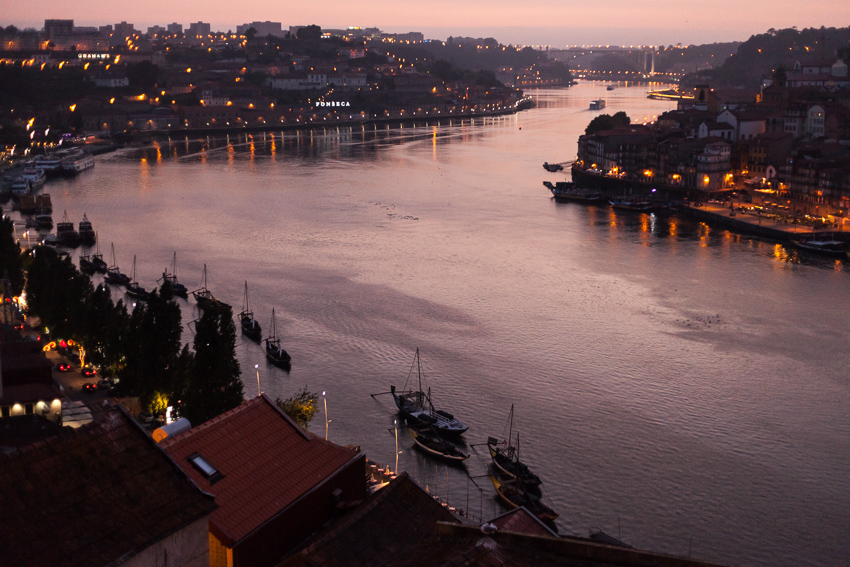 Only a few minutes later, the sky of Porto bursted with colours again, enveloping the city and the Douro river in soft pink light. With the help of the city lights that were becoming more and more visible, I started to see the traditional houses with tiled roofs and the illuminated landmarks again. The whole scene looked completely magical! 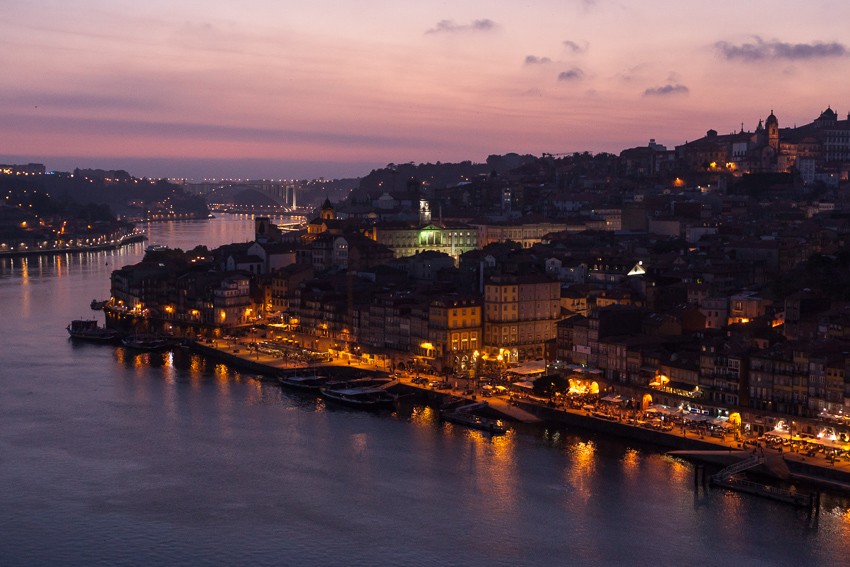 The next -6° to -12° of the sun below the horizon are called "nautical twilight" and the sky darkens considerably.  As this happens, the city lights become brighter, reflecting in the river and illuminating the cityscape. Very soon the sky will turn black and the natural light and colour show will be over. 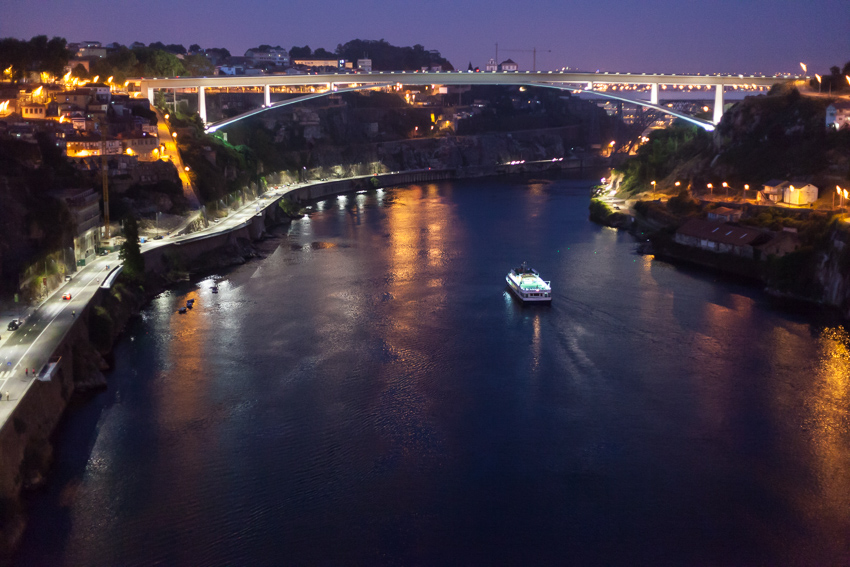 After about two hours on the top of the bridge capturing all possible hues of every stage of twilight, it felt like it was a good time to go back down to the city to warm up, have a good Portuguese dinner and a glass of port wine to end the day!