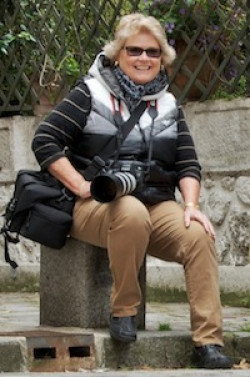 We recently wrapped up our May 2013 Photography Workshop in Paris, again with a wonderful group of people joining us. We asked Kathleen Richardson, a returning participant from our April 2011 women-only workshop, for her feedback on her experience. Kathleen sent the following note:

I have been to Paris many times in the past and have taken all the usual photos, trying to match the postcards as best I could. Two years ago was a special trip to Paris to celebrate my retirement after 40+ years in the business world, so I wanted to do something different. When I discovered a photography workshop which lasted over three days and was for women only, I was intrigued. Perhaps I could finally get some 'punch' to my photographic efforts! At least I wouldn't be getting the same old shots.

Well the workshop turned out to exceed any and all of my expectations. I became adept at setting shutter speeds (and when to use shutter priority), the same for aperture priority, not to mention exposure compensation! Reading histograms became second nature and ISO adjustments a walk in the park. I could finally discern between good and bad compositions! I took some great pictures! The unexpected plus was meeting and being inspired by so many interesting and talented women in the workshop who had come from all around the world. Some of us are still in touch. What a wonderful, life changing experience!

Earlier this year my old camera gave out and I invested in a new one, a Canon 6D. I had been quite busy over the last two years and felt that I had gotten a bit rusty in terms of my photography skills. With another trip to Paris in the works – I decided to take the workshop again. I could stand a good brush-up on shutter speeds, apertures, ISO's, etc. And, perhaps there would be an opportunity to take some shots that I had admired during the last workshop but didn't get a chance to take myself. So I signed up for round deux and was not disappointed. I got up to speed in no time on my new camera, was inspired to take some great photos and met some wonderful new friends. I already promised I would be back again in two years.

Thank you Kathleen, for your note and for sharing your experience with our readers! We look forward to welcoming you back to Paris again for another workshop or photo activity in two years.