The Majestic Bridges of Paris

While the Seine river separates the left bank from the right bank of Paris, multiple bridges link the two parts of the city and provide a great subject for photographic exploration. There are 37 bridges within the city of Paris, 4 of which are pedestrian, and some others are rail bridges. Remember that often the best spot to capture a beautiful bridge is from a bridge next to it, so get your maps ready! 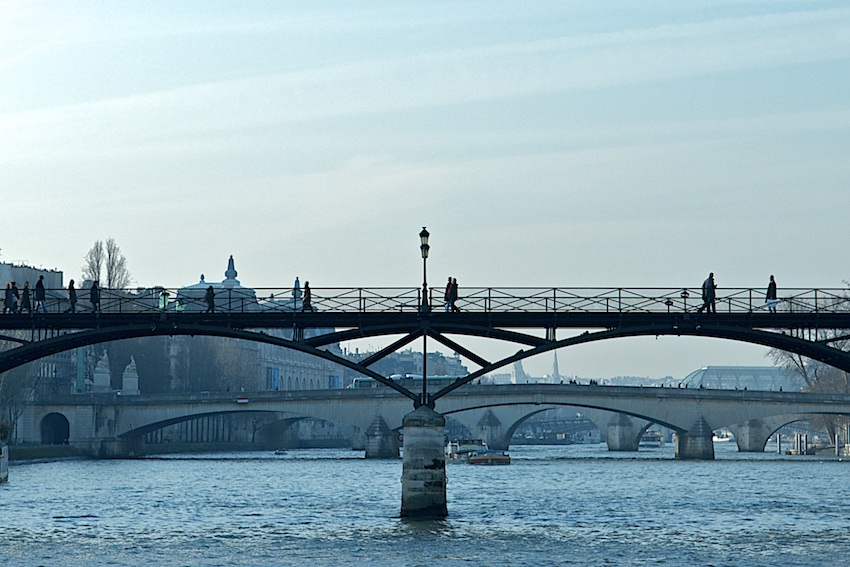 Start your journey in the east of the city from the Passerelle Simone-de-Beauvoir that joins Bibliothèque Nationale de France and Parc de Bercy. Light and simple, this pedestrian bridge looks like two waves running beside each other and interconnecting on two levels. Use its railings as leading lines with the library in the background, and incorporate a passer-by for some interesting images.

Next, move on to Pont de la Tournelle that joins the Left bank with ïle Saint-Louis. While this bridge is not particularly ornate, except for the statue of Saint Geneviève, the patron saint of Paris, it offers one of the best views over Notre Dame cathedral, the eastern tip of Île de la Cité and other bridges, especially early in the morning as the sun rises. The top of the Eiffel tower can also be seen from the island side of Pont de la Tournelle. 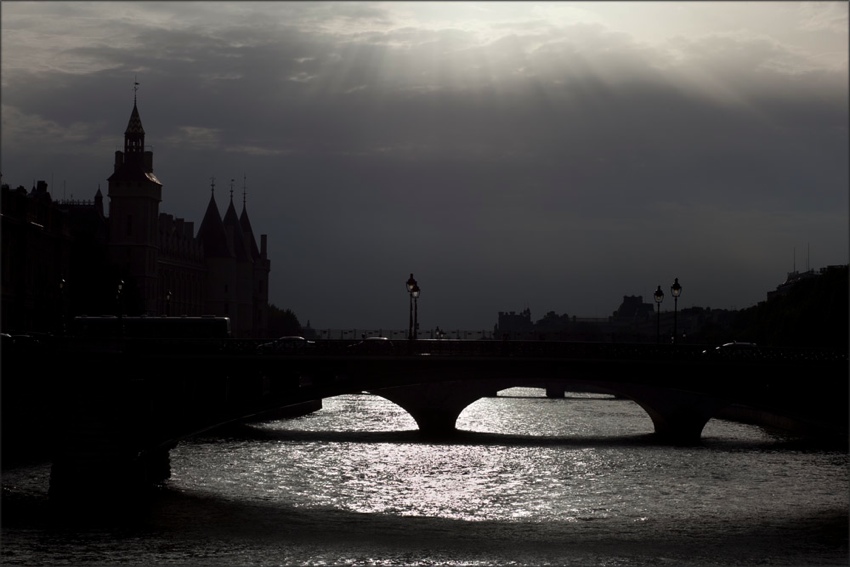 The small pedestrian Pont Saint-Louis joins the two islands and not only offers a view over Hôtel de Ville, but is also a popular place for street artists and musicians. Jazz bands, piano players, roller-skaters, and city poets make great photo subjects against a historic background.

The small Pont de l'Archevêché, connecting Île de la Cité and Left bank, is nowadays all covered with the infamous love locks. While it may look attractive with the locks sparkling at night, the bridge cannot support the weight of the locks anymore and steps are being taken to protect it. The bridge looks great from the waterfront and is a nice spot for closer views of the Notre Dame Cathedral. 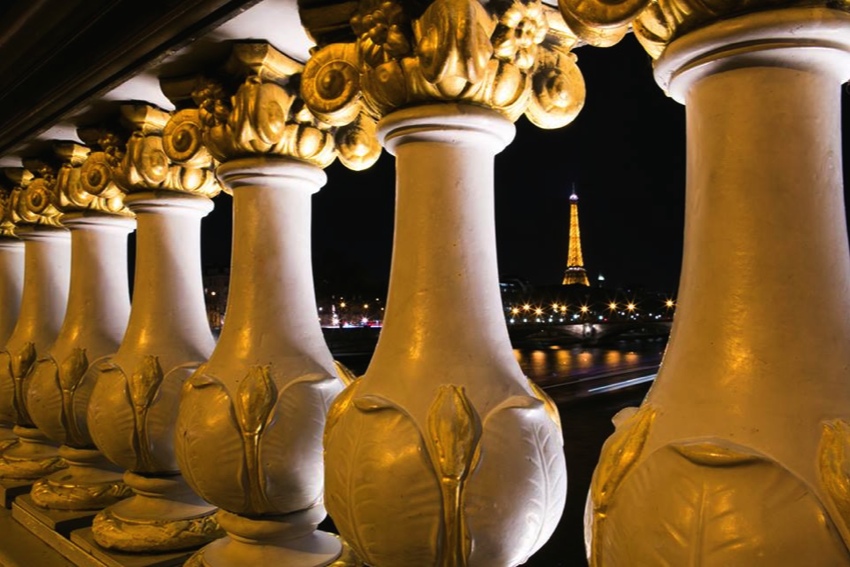 The oldest standing bridge of Paris, Pont Neuf, located at the western tip of Île de la Cité, is well worth a visit. Built over 400 years ago, this stone bridge consists of two separate spans joining the island with the two banks of the river. The equestrian statue of King Henry IV stands in the middle of the bridge. While Pont Neuf offers great views over the Louvre and the river from its multiple balconies, the bridge itself is very photogenic at sunset from the Square du Vert-Galant at the tip of the island or from the next bridge over, Pont des Arts.

The famous Pont des Arts, a pedestrian bridge linking the Louvre on the Right bank and Institute de France on the Left bank, is now known as "the love lock bridge". Thousands of couples come to Paris to put a lock on this bridge and to throw the key in the Seine as a symbol of their everlasting love. However, the bridge itself has long become a victim of love, with locks being regularly cut off by city services and some of the original grids being temporarily replaced by not so pretty cardboards. Nevertheless, Pont des Arts is still beloved by tourists for its views over the river Seine, the Louvre, Île de la Cité with Pont Neuf and the magnificent Institute de France. 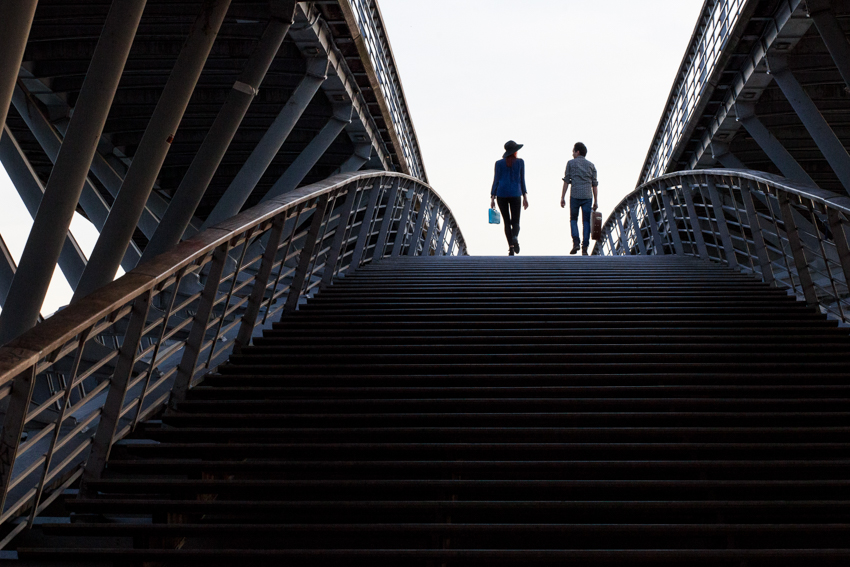 Another pedestrian bridge, Passerelle Léopold-Sédar-Senghor (formerly Passerelle de Solférino) is not only a great place to practice some architecture photography for its graphic lines, curves and repetitions of stairs, but also to have a picnic on a summer afternoon, while watching (and of course photographing!) the sun going down behind the Grand Palais with its splendid glass roof.

Known as the most ornate and extravagant bridge of Paris, Pont Alexandre III well deserves its name. Inaugurated in 1900 and named after Russian Tsar Alexander III, at the time this bridge was considered a marvel of engineering, consisting of a single span steel arch. Decorated with posh lamps and golden statues, Pont Alexandre III offers spectacular views of the Eiffel tower, Les Invalides and Le Grand Palais both day and night. For a nice side view of the bridge, go down to Quai d'Orsay on the Left bank, right by the recently renovated metro entrance Invalides. 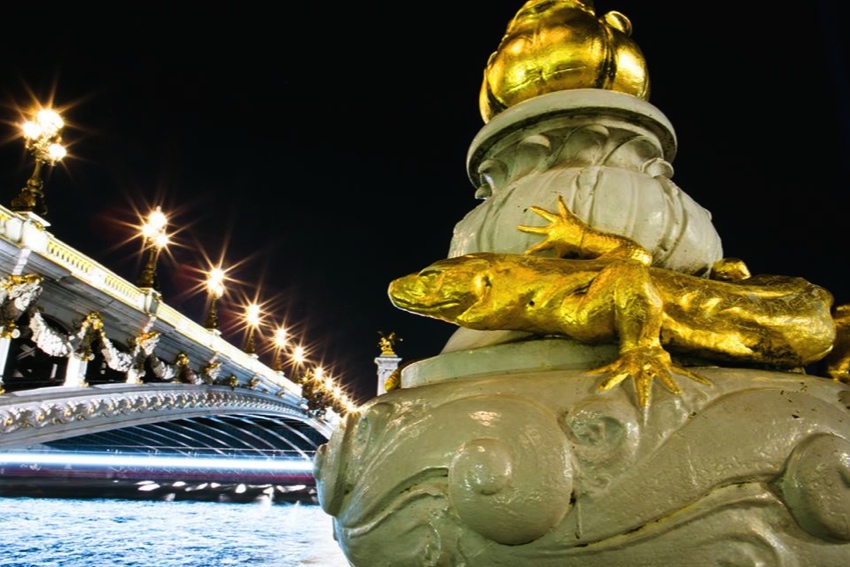 Finally, you may end your journey at Pont de Bir-Hakeim, a two-level arch bridge, located just behind the Eiffel tower. Built in 1905, it features a central arch made of stone, elegant metal colonnades with lamps that create great perspectives, the viaduc for metro line 6, and metal sculptures on its pillars. While being a relatively quiet place with few tourists, it offers one of the best views of the Eiffel tower. After taking some photos on the bridge, stroll along the île aux Cygnes, a narrow island in the middle of Seine, to find a Parisian replica of Statue of Liberty at its tip.